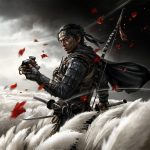 You are reading
Ghost Of Tsushima Surpasses 5 Million Copies Sold

There is no doubt that Ghost of Tsushima was one of the best games released on PlayStation 4 this year. This is incredible when you think that games like Final Fantasy VII Remake and The Last of Us Part II also released this year. The studio behind Ghost of Tsushima is Sucker Punch Productions the studio behind such franchises as Sly Cooper and Infamous. While Ghost’s certainly was a step in a new direction for the studio, it was brilliantly executed. Late yesterday, we learned just how successful Ghost of Tsushima had been for the PlayStation brand.

Ghost Of Tsushima Continues To Thrive

Head of PlayStation’s Worldwide Studios Hermen Hulst took to Twitter to share some exciting sales numbers for the new IP. First, Ghosts had officially crossed over 5 million copies since its release in July earlier this year. On top of this achievement, it was also the fastest-selling first-party original game on PlayStation 4. What this means, is that it is the fastest-selling new IP of the generation as made by a PlayStation Worldwide Studio. This is an incredible accomplishment, as Sucker Punch could have easily continued with the Infamous franchise and played it safe. But they took a risk with an ambitious new IP, and absolutely knocked it out of the park. As the sales numbers certainly support that. It will be exciting to see what Sucker Punch will work on in the future. Could we see a sequel to Ghost Of Tsushima? Only time will tell but with its big success, it’s hard to imagine a sequel not being prioritized.

#GhostofTsusima is our fastest-selling first party original PS4 game with more than 5 million copies sold since its debut in July. What an incredible achievement by @SuckerPunchProd!

Have you played Ghost Of Tsushima yet? If not, you can check out our spoiler-free review here. Don’t forget to check back for the latest gaming news and information.