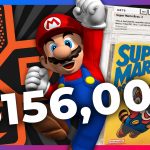 You are reading
The World’s Most Expensive Game

HERITAGE Auctions just sold a mint condition Nintendo game for a staggering US$156,000. This makes this version of Super Mario Bros. 3 the world’s most expensive game.

Just a few months ago in July, HERITAGE Auctions sold a similar condition Mario game for US$114,000. However, on November 20th that record was broken once more. The starting bid began at an incredible US$62,500 but was quickly raised to the price mentioned above. The starting bid was so high because the condition of the game was rated 9.2 A+ by Wata which translates to almost perfect condition.

Another unique thing about this game is the packaging layout where the word “Bros.”. The layout is formatted to the left, covering one of Mario’s signature white gloves. It’s a very rare version that is coveted by collectors for a long time. It’s these tiny minute details that increase the value of the game and made it world’s most expensive game.