Xbox Series S & Series X are both very capable consoles. Both come with Zen2 based CPUs that offer way better performance in games than last-gen consoles. This extra CPU capability allows both boxes to run games at a much higher frame rate. However, this requires a title to have an unlocked frame rate or for the developer to deliver a patch that will unlock it. But what about games that have frame rate locked to 30 FPS and developers have no plans to unlock it via a patch? Xbox team came out with a solution.

They call it a “FPS Boost”. This new tech can force selected 30 FPS locked titles to double the frame rate. In some cases like Super Lucky’s Tail they quadrupled it. The Xbox Series S now runs this game at 120 FPS as opposed to 30 FPS before. For now, only 4 games take advantage of FPS Boost – Far Cry 4, Watch Dogs 2, Super Lucky’s Tail & Sniper Elite 4 – but there will be more in the future alongside FPS Boost & Auto HDR system settings. 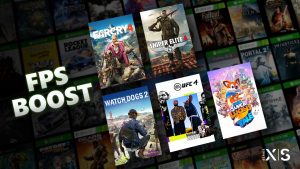 “This is just the beginning. We will announce and release more titles featuring FPS Boost soon, as well roll out new menu icons and system settings in an upcoming system update. Starting this Spring, you can go into the “Manage Game” section for any title, where you’ll be presented with a new “Compatibility Options” button that will allow you to toggle FPS Boost (as well as Auto HDR) on or off. There will also be a new indicator informing you when a game is running with FPS Boost whenever you hit the Xbox Button on your controller. You decide how you want to play your favorite games, whether in its original form or with FPS Boost.”