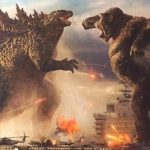 You are reading
Godzilla vs Kong Dominates a Second Weekend

Nothing can stop the dominance that Godzilla vs Kong has at the box office. Voyagers did manage to break through the top five movies this week. Additionally, the rest of the box office is starting to shuffle around. While some movies are jumping back into the top three.

Godzilla vs Kong grossed an estimated $13.8 million at the box office. While that figure doesn’t seem so large, it’s still impressive given the fact that the movie is still available on HBO Max. Right now, Godzilla vs Kong is sitting at $69.5 million domestically. It is sitting at $357 million worldwide, look for this film to easily cross $400 million in the next week. Fans are hopeful that the movie’s success will result in more MonsterVerse films in the near future.

The Unholy dropped down from number two this weekend. It was unable to gross more than the hit movie Nobody. Expect that movie to drop from the top five in the next two weeks as more movies slowly hit the box office.  While Voyagers grossed an estimated $1.3 million in its first weekend. This movie probably won’t make it up into the top three during its time. Most movies that start off at five or below generally don’t always climb up unless they are animated movies.

This past weekend, Mortal Kombat released in 17 countries. In Russia, the movie was able to gross an estimated $6.1 million. At this point, the movie is sitting at $11 million worldwide. A domestic release was pushed back to April 23rd. That was so Godzilla vs Kong could have some more time in theaters without much competition.

Expect Godzilla vs Kong to continue to dominate the box office. Next weekend no movies are listed to be released in a wide number of theaters. Mortal Kombat is the next big movie to release in a couple of weeks.