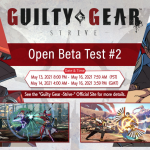 Arc System Works announced their plans for a second beta for Guilty Gear Strive. This news came with the last “Developer’s Backyard.” On Tuesday, the devs shared the open beta dates as well as balance changes to come to Guilty Gear Strive.

The second open beta for Guilty Gear Strive will once again be available on PlayStation 4 and PlayStation 5. Players can download the client in advance starting on May 7 EST through the online PlayStation store. The beta will then be playable from May 13 – May 16. Breakdowns for local timezones are below.

This beta will bring key differences compared to the last time players experienced Guilty Gear Strive. Firstly, two new fighters will be available in the form of Anji and I-No. These characters were announced close to the release of the first open beta. As such, they were not available for player use. Fights will have a fresh feel with these fighter’s unique styles of play in the second open beta.

Additionally, balance changes are coming to certain moves. Players who spam repetitive inputs will find it harder to keep their opponent pinned down. Arcsys (Arc System Works) has now implemented opponents to fall more quickly if a player uses a move repeatedly. This seems to directly target infinite loops, a problem they have examined from the previous online player data.

Anti-air moves are now stronger. They will reach more upward and remain active longer. While jumping, airdashing, and air attacking all have taken a hit to their recovery time. Effectively, players who abused jumping and air combat will now take longer to recover from these moves, making them more easily punished.

Finally, the input forward punch will serve as a universal anti-air for each character. Arcsys also mentioned overall game and individual character adjustments. Players will have to wait and see the details themselves when the open beta is live.

A new feature will be available in the online lobby. A rematch option has now been added to Guilty Gear Strive for the second open beta. Players can rematch up to three times with one another (a best two out of three set with these standards). This differs if one’s rank floor changes. Online lobbies will also have “Duel Stations” for avatars to queue up for matches. This should alleviate the difficulty of manually approaching every avatar you wanted to battle. 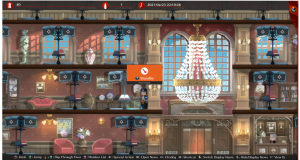 May 13 – May 16 players will once again choose between Heaven or Hell. New fighters, mechanics, and quality of life changes have this open beta shaping up to be even better than the last.

Guilty Gear Strive releases on June 11 for PlayStation 4, PlayStation 5, and PC. Will you try Anji or I-NO in the next open beta or continue mastering your previous fighter? Let us know in the comments down below!

Facebook Twitter Google+ LinkedIn Pinterest Tumblr
Previous article The Last of Us Part 3 Has A Story Outline But Isn't Currently Being Made By Naughty Dog
Next article The Lord's Minute: PlayStation, Firewalk Studio Team Up For Original Multiplayer IP