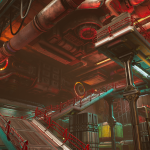 You are reading
Murder on Eridanos: The Outer Worlds DLC Review

Obsidian Entertainment must have a big Knives Out fan. After last fall’s decent expansion for The Outer Worlds, Peril on Gorgon, Obsidian returns with a whodunnit murder mystery in Murder on Eridanos. When a simple PR event for a new product turns into a murder scene, who better to call than the captain of the Unreliable? With a handful of suspects and numerous clues on the gas giant, Eridanos, it is time to go sleuthing.

Your ship receives a message from the gas giant plant, Eridanos. Halcyon Helen, a famous actress in The Colony, is dead. She was found murdered at the Grand Colonial Hotel, where she was to promote a new drink from one of the Board’s member companies. Worse still, this happened at their famous orchard/distillery complex, which is terrible PR. Upon arrival, the authorities hand you a specialized gun, the Discrepancy Amplifier, that scans for clues. This gun even talks to you about said clues. While The Colony mourns and you investigate, tensions flare. Murder on Eridanos highlights various strains and peculiarities around the complex. Like every planet in the Colony, faction rivalries run rampant on the plantation. Local wildlife, including the orchard’s giant mosquitos, threaten your case multiple times. If you count the pink growths on some workers, then you can also say the wildlife likes to creep you out…a lot. 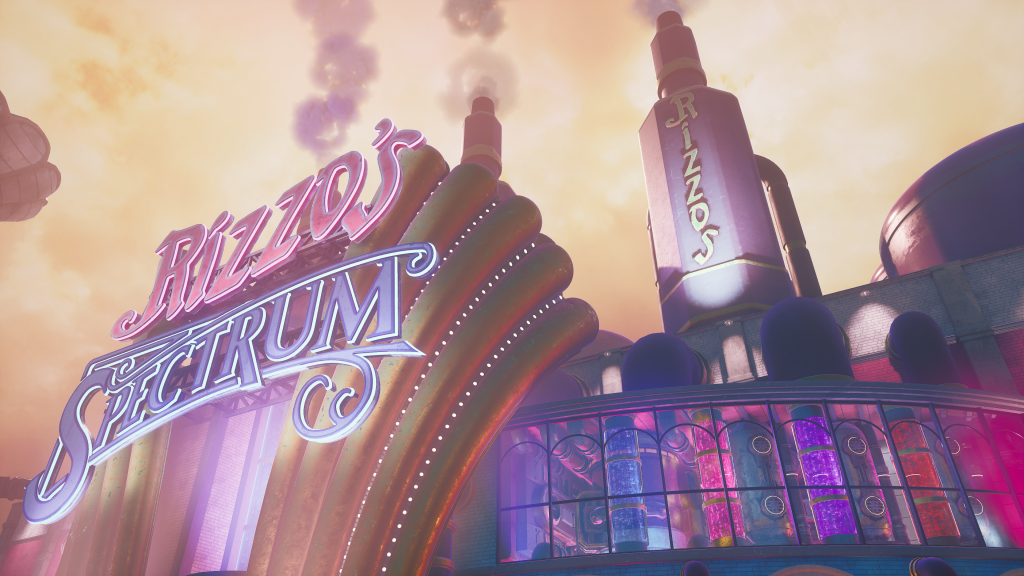 Say what you want about Rizzo’s, you can’t call them bland. Obsidian Entertainment, 2021

You spend the entire DLC on Eridanos. Unlike the last DLC, Murder on Eridanos fully anchors you to the crime scene. The hotel’s penthouse serves as your base of operations and your crew hang out. “Base of operations” is not just a figure of speech here; you can change your active party members, tinker at the Penthouse workbench, and buy from vending machines. For the record, the Penthouse does not need to be a base. The Unreliable remains docked on Eridanos for the entire add-on. However, making the Penthouse your base further ingrains you at the scene of the crime. Therefore, you feel more connected to the location and the case.

The detective storyline makes for a nice change of pace for The Outer Worlds. Although corporate greed still exists, like the rest of Halcyon, it wisely takes a back seat. Obsidian smartly featured a new genre compared to the rest of The Outer Worlds’ content. A whodunnit story also opens the game to more player choice. Since most main story missions revolve around interviewing possible suspects, you can choose the order you interview in. This enables you to put the pieces of the puzzle together as you see fit. You can even guess the culprit without interviewing all suspects. I appreciated the flexibility Obsidian provided by letting me think outside of the box at the end. Obsidian smartly structured their mystery, giving reasonable options without spoiling answers. Whodunnit concepts give The Outer Worlds a breath of fresh air which is ironic considering the story takes place on a gas-giant. 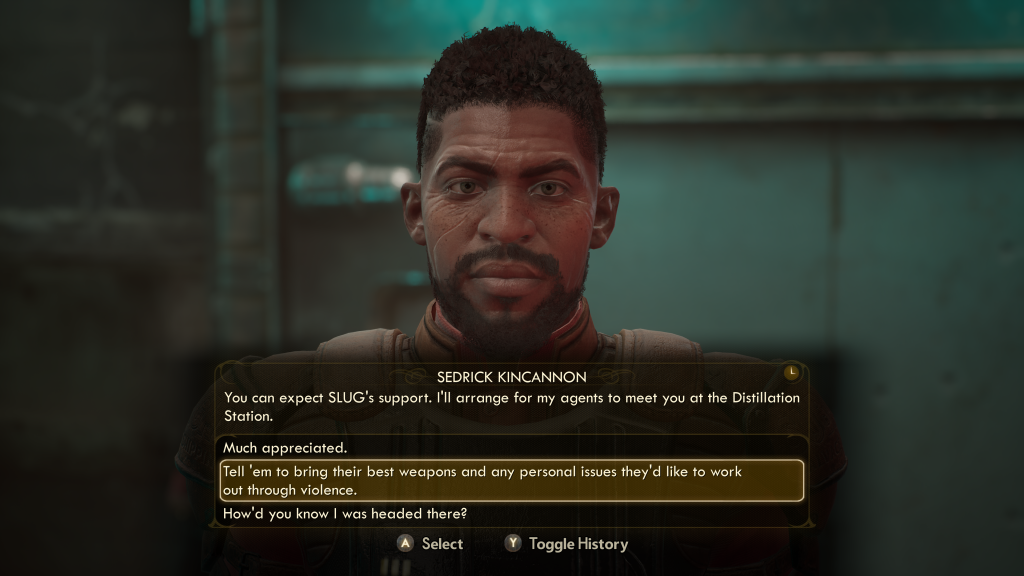 Just a reminder that The Outer Worlds excels at dialog writing. Obsidian Entertainment, 2021.

All Doesn’t Work Well on Eridanos

Fresh concepts aside, some plot moments fail to pack a punch. They falter due to light character development or by subverting that development. Some characters get so little, that when the story tries to amplify their conclusions, it feels hollow. Even worse, other reveals undercut everything you’ve seen about these characters. When development falters, characters feel like bits instead of integral plot aspects. Then, when development gets undercut, the moment feels more like a copout. Even though the dialog is still top tier, the main arc is not. Murder on Eridanos‘ main arc does not hit Obsidian’s high narrative bar.

Your Discrepancy Amplifier gets some neat moments, but also very sludgy ones. On one hand, the Amplifier can help point out unusual, but important, details to your search. These moments give a thoughtful layer of subterfuge that you wouldn’t otherwise notice. Sometimes, these moments start a dialogue with the Amplifier, which can lead to skill-based dialog options. On the other hand, tracking with the Amplifier is a slog. When the lead has no clear set path, you need to scan for the same item (normally footprints), and get the same dialog, over and over again. Fortunately, these tedious moments do not frequently happen, but they happen enough to be annoyances in Murder on Eridanos.

From a technical standpoint, there are good and bad quirks. For good quirks, players really get to see the next-gen upgrade perform here. Most of the time, the framerate is liquid-smooth. You get a couple of traditional cutscenes that really bring out The Outer World’s technical heights. Simultaneously, there are some minor headaches. The overhead map regularly loads in blurry or pixelated. This issue persists through the entire DLC, which is shocking on next-gen consoles. While the good quirks outweigh the bad, it is still disappointing. 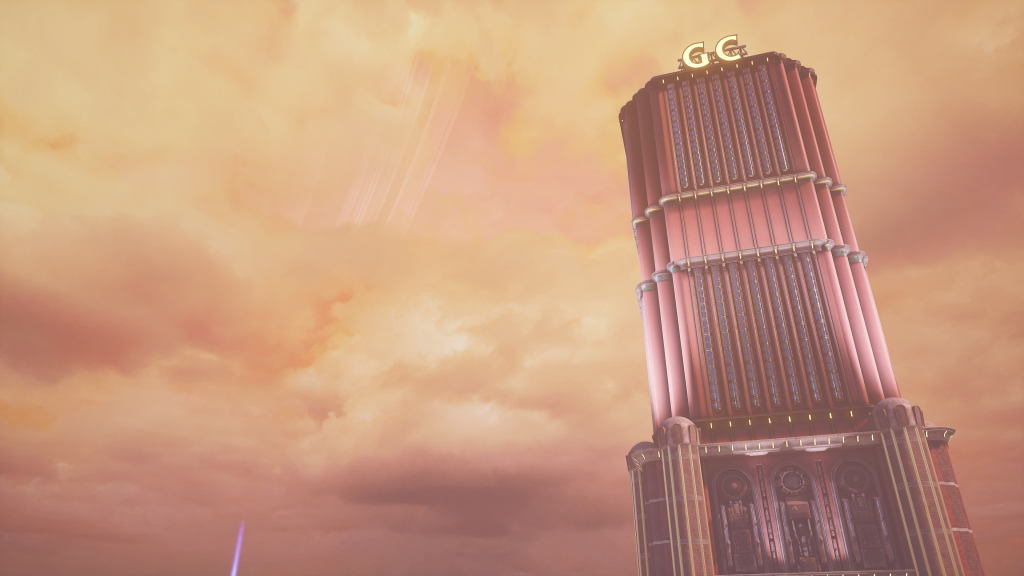 What happened at the Grand Colonial Hotel? Obsidian Games, 2021

Despite its Flaws, Murder on Eridanos is an Improved DLC

Let me make something clear: Murder on Eridanos has notable flaws. These flaws be they gameplay, plot, or technically oriented, hamper the overall experience. Yet, this DLC steps over its predecessor. You can thank the fresh story structure, commitment to the new location, and continually excellent dialog.