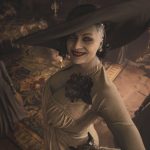 You are reading
New Resident Evil Showcase Brings the Scares

Capcom hosted another Resident Evil showcase on Thursday. Once again, the show delivered Resident Evil: Village news along with other announcements in lieu of the 25th anniversary of the franchise.

Ethan Winters fights for his life in the new story trailer. Lycans and Vampires of the land run rampant. Thus giving Ethan a run for his money compared to Biohazard’s Baker family. In the end, Ethan confronts series-long protagonist Chris Redfield, as a result of Chris killing Mia in the previous trailer.

The different factions, lycans of the village (Led by Karl Heisenburg) and vampires of Castle Dimetrescu (led by Lady Dimetrescu), is an interesting dynamic. One that leads directly into the next round of demos for the game.

Resident Evil Showcase revealed the first release of multiplatform demos for Resident Evil: Village. The previous “Maiden” demo was exclusive to PlayStation platforms with Castle Dimetrescu as its setting. Capcom announced the new demo, featuring the Castle and the Village, will be available on PS5, PS4, Xbox Series XIS, Steam, and Google Stadia. The full demo with both locations has a time limit set for one hour.

Capcom confirmed Playstation users will have early access. Starting today, PlayStation owners can download the demo, but there is a catch. The demo will be split in half for two different scheduled days, one for Village and one for the Castle. PlayStation players will only have thirty-minute sessions during each phase of early access, totaling to that one hour.

Additionally, players can spend that time between the village and castle portions of the game.  This time can be split evenly or one area favored for the other. No matter the choice, players are sure to encounter horror along the way.

The Resident Evil showcase also unveiled the long-awaited “Mercenaries” mode. This game mode is being reintroduced to the franchise. Action-packed time challenges are front and center. Here, players will fight their way through the enemies of Village in this arcade game mode. The breakdown also revealed a new character, The Duke. He will be the broker for players looking to upgrade their arsenal, purchase new weapons, and unlock combat perks.

Another collaboration comes in the form of Resident Evil 4. The much-beloved title has been reimagined for VR. The teaser showcase Leon, well his hands, carving a path through the undead. This version of Resident Evil 4 has been completely ported to VR, and will be available for the Occulus Quest 2. Additionally, more details will be announced at the Occulus Games Showcase on April 21.

Those are the highlights from the Resident Evil Showcase. Capcom may have further announcements down the line in tangent with the series’ 25th anniversary.

Check out our impressions of the Resident Evil Maiden demo here.

What were some of your favorite announcements? Let us know in the comments down below.