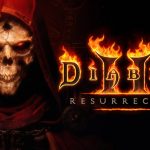 You are reading
Diablo 2 Resurrected Announced for September

If you’re still waiting for BlizzCon, Blizzard has another project for you. Diablo 2 Resurrected releases this September on Xbox platforms.

The announcement came during Xbox’s E3 press conference on Sunday. 2021 marks the 21st anniversary of the original Diablo II. Diablo II Resurrected comes with many technical upgrades and aesthetic upgrades.

Aesthetically speaking, Diablo 2 has updated graphics, much needed after two decades. Technical upgrades include 4k performance on all platforms and cross-progression between the two. From a gameplay perspective, there will be 8-player co-op, without needing LAN support.

One thing that remains the same, however, is the gameplay. Players will still use the original Diablo 2’s isometric gameplay and fight off hellish creatures as they themselves descend to Hell.

Fans are currently waiting for updates on Diablo 4, as well. Blizzard announced Diablo IV at BlizzCon in 2019, and is expected during 2022 or 2023.