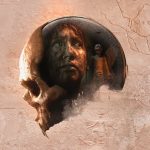 Summer Game Fest is the gift that keeps on giving. Publisher Bandai Namco revealed the new title in The Dark Pictures Anthology. House of Ashes is the latest title where your only hope is the choices you make on your journey.

The Dark Picture Anthology is a series of survival horror games from the minds of Supermassive Games. Each game utilizes expert cinematography to capture the fear and dread akin to an actual horror film. Player choice is the prime gameplay mechanic for the series.

Players can freely choose which path to take in the story; however, wrong choices may present disastrous results. This implements the “Butterfly Effect.” This theory states one small action can lead to cataclysmic ones. Whenever a choice is made in-game, one can never tell its initial impact.

Thus, House of Ashes enters the picture. This is the latest installment for The Dark Pictures Anthology. House of Ashes takes place in Iraq. The story centers around a military unity who find themselves trapped underground in a Sumerian Temple. The team can either work together to find freedom or fend for themselves against the ancient evil they have awakened. During the story, players will be tested. One wrong choice could result in a character’s death with no chance of survival.

The Dark Pictures Anthology – House of Ashes releases on October 22, 2021. The game will be available on PlayStation 4, PlayStation 5, Xbox One, Xbox Series X|S, and PC. Additionally, an exclusive edition titled “Pazuzu Edition” will also be released. This includes the game, the Pazuzu Editon box, an underworld creature figurine (9x9x10cm), a metal pin, exclusive art print, stickers, and a preorder bonus. This bonus will be day-one access to “The Curator’s Cut.” This unlocks previously unavailable scenes along with different characters and outcomes. You can preorder it or the standard edition here. 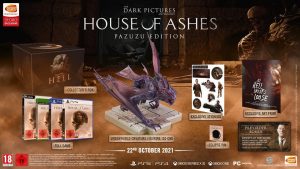