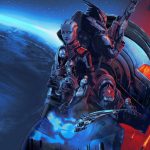 It is always exciting when new game studios are announced, especially when they have historic developers leading them. We have seen a variety of studios that have been announced in the past few years. From Gravity Well the studio made up of former Respawn developers, as well as Archetype Entertainment that is filled with legendary Bioware talent. Now today, a new independent studio was announced by another former Bioware developer who brings with him decades of knowledge and experience.

Today, via Twitter former Bioware GM Casey Hudson announced his new project Humanoid Studios. While many people will be familiar with Hudson’s history of work with such iconic franchises as KOTOR, and Mass Effect. The last game that Hudson worked on before his departure from Bioware was the looter shooter Anthem, which had its challenges that have been quite publicly discussed. However, Humanoid Studios offers Hudson a fresh start, and with it an opportunity to do something completely new independently. He stated in the Twitter announcement that the team will be focusing on an all-new IP with developer creativity and artistry being the centerpiece.  The company has an official website that lists the job roles they are looking to fill in the coming months you can find the site here.

I've been working with some colleagues on something awesome, and I wish I could tell you all about it! For now though, I can only say this…

While it is impossible to predict what kind of game Humanoid Studios will be making, under Hudson’s leadership it will no doubt be something to keep an eye on. I look forward to continuing to cover this new studio and to see what they are working on when they are ready.