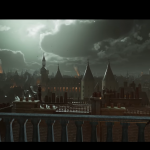 Spiders have quietly become one of the most interesting studios to watch as they slowly grow and develop. With the release of Greedfall, while the game did have issues, and a fair bit of jank. It drew many comparisons to old Bioware games in regards to its systems. Focusing heavily on impressive narrative story-telling and building unique and interesting characters, Greedfall was a pleasant surprise in 2019. A brand new game called Steelrising looks to continue to build on this with even more dynamic combat.

Steelrising is the brand new hack and slash adventure from Spiders that looks to provide an alternate take on the history of Paris in the 17th century. Featuring automata-styled mechs roaming the streets of Paris under the leadership of Louis XVI. You will play a young revolutionary simply called Aegis, who is fed up with Louis’s tyrannical reign and wants to fight back. The game looks like it blends almost a Bloodborne-styled world with Nier Automata over-the-top combat. In a world of cinematic announcement trailers, I have to tip my hat to Spiders for showing off early Alpha gameplay to showcase the game. The game is set to come to PS5, Xbox Series consoles, and PC in June 2022. You can sign up for newsletter updates about the game here.

While we don’t know more than that currently, we certainly look forward to hearing more about Steelrising in the months leading up to its launch.