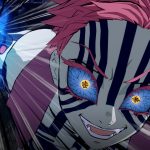 You are reading
Rui and Akaza First Impressions

Demon Slayer: The Hinokami Chronicles is a 3D arena-style fighter. Cyberconnect2 fully captures the feel from the Demon Slayer anime within the game. Additionally, the starting roster characters each felt unique despite the low number of fighters. For that reason, fans have been clamoring for demon characters. Six DLC characters are confirmed to arrive in Demon Slayer: the Hinokami Chronicles for free. Thus, players are treated to the first pair of DLC demons. Rui and Akaza come to shake up the battlefield. 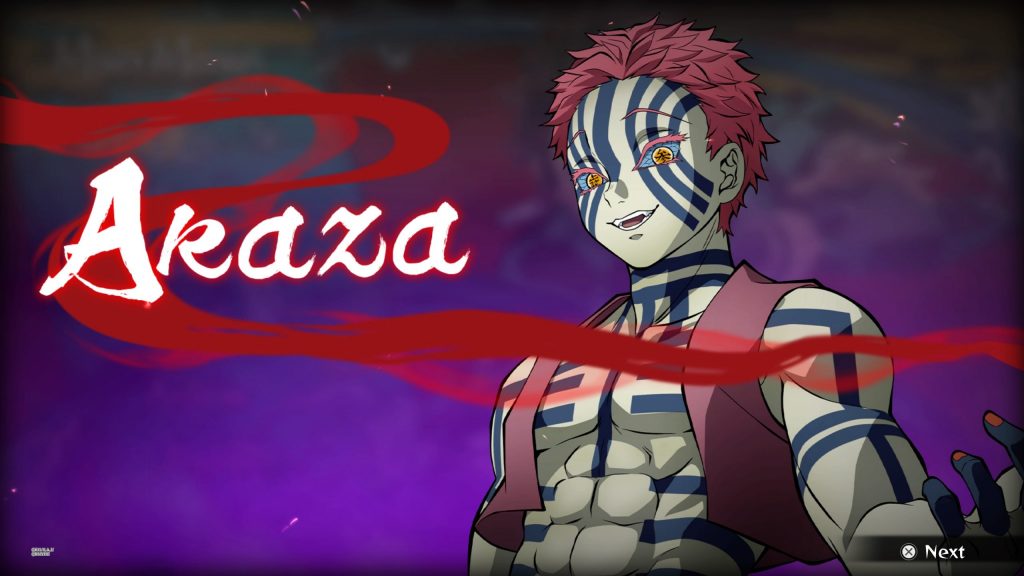 Demons are a monstrous force. They are tough to handle in the anime. As a result, they are played solo. Their assist gauge is utilized for demon skills. In a similar fashion, both bars can be used to escape. Lastly, demons can heal a portion of health when activating boost. This is in addition to resetting their demon skill bars and skill gauge. The heal is interrupted if the player dodges, blocks, or is hit.

Akaza is interesting. He debuted during the Mugen Train arc from the anime. Akaza stole the show with his first appearance. However, he falls short compared to other fighters. Rui and Akaza both take more damage than most of the roster. Presumably, Cyberconnect2 wishes to balance this with their healing abilities. Yet, Akaza takes the most damage of anyone.

Every character has a hidden damage modifier. This value dictates how much damage a player takes. Akaza has a 1.25 modifier. As a result, he takes the most damage compared to others in the current roster. His health bar melts very quickly even with two ways to partially heal. Unfortunately, he does not make up for this in damage output. 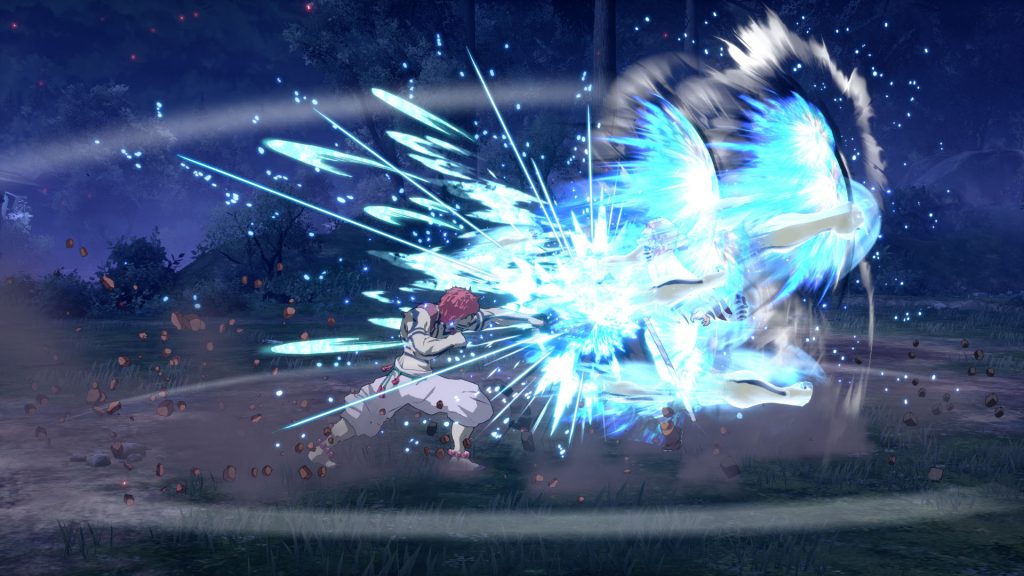 Akaza’s damage is mediocre. I found myself working harder to get high damage combos with him compared to other fighters. His normal demon skill is a ground pound type move that does good damage and is great for ending combos. The tilt demon skill is his best move. It is a lariat type move that gives Akaza armor making it a great combo opener and gap closer. Yet the combos themselves can be problematic if careless.

Akaza has flashy animations. These are a great spectacle. However, they can be deceiving. Akaza’s attacks are actually slower than they appear. The start-up animation for combos can leave you vulnerable to being punished by counter poke if you are not careful. More often than not, I would lose against opponents during frantic mashing of attacks when cornered due to their character simply being faster. Overall, Akaza has a fun feel but is hard to keep alive. I find him to not be viable for competitive play. On the other hand, he has the best ultimate art cinematic in the game.

Rui and Akaza both arrive as a pair. However, these demons were not made equal. Rui is the first zoner of Demon Slayer: The Hinokami Chronicles. Thus, he brings a new playstyle into the mix. His normal skill fires slow webs that track. The tilt skill shoots three blades that travel and spread quickly. These tools alone add great mixups for the fight’s neutral. 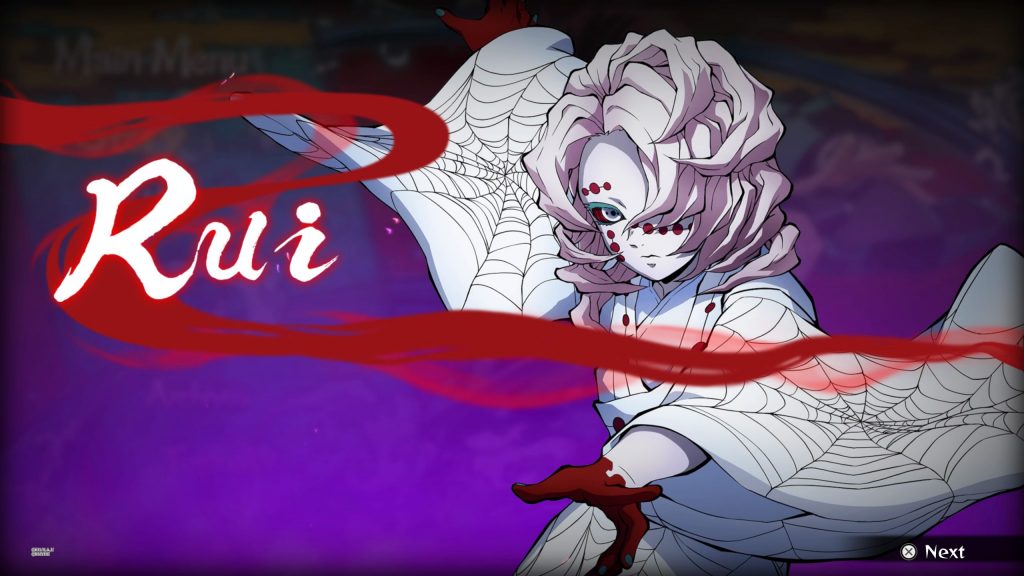 Rui’s demon skill creates a web dome that spawns at the opponent’s location. This leads to a yellow combo if followed up. The tilt demon skill enacts a backstep as Rui summons down webs in defense. These persist for a few moments giving the player a moment of reprieve. Lastly, Rui’s guard skill summons a dome of webs around Rui. During the animation, Rui is invulnerable. 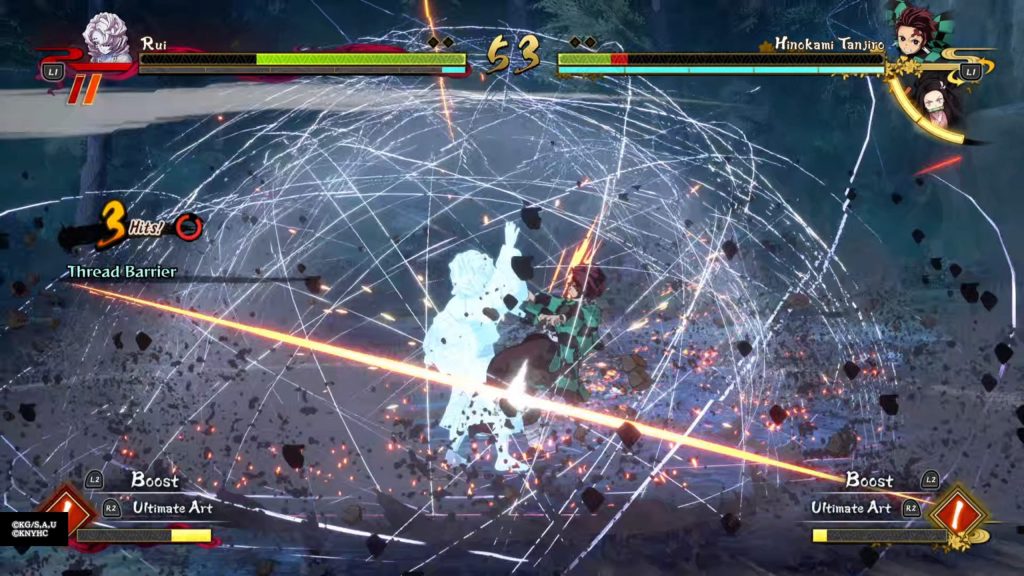 Rui has decent damage and a lot of options. I felt in control of the match when playing as Rui more often than not. He simply has answers for most of what the enemy throws at you. People are not accustomed to dealing with zoning as Rui is the first. A common tactic for play is to send your assist ahead of you to help close the gap. However, Rui can simply throw projectiles at the assist and you or use one of his other skills to cover his person.

His combo attacks also have a slightly longer reach than normal. This leads to great stagger pressure and often beating the enemy’s counterattack due to the difference in range. Lastly, his ultimate art tracks the enemy regardless of where they are on the map. This will catch many players off guard as no other fighter has this ability. Usually, people feel safe planning their course of action on the map edge far away. However, Rui now keeps players guessing. 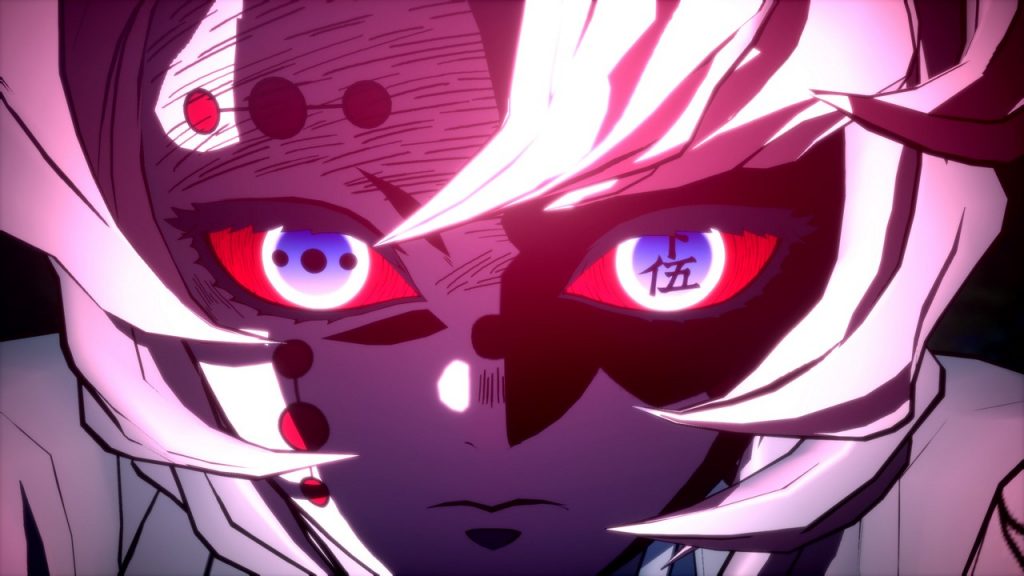 Assists lead to great setups at the high tiers of play in Demon Slayer: The Hinokami Chronicles. Rui and Akaza have to fight alone. Therefore, they are seemingly at a disadvantage. The ability to heal and access to additional skills is not quite enough to cover the loss of an assist at least in Akaza’s case. Rui’s ability to control the neutral game allows players to keep the tides in their favor.

I applaud Cyberconnect2 for wanting Demons to feel more unique and have a high-risk factor in the game. However, I found Akaza to be very lacking. His rush-down playstyle is hampered by the lack of survivability and damage output. It is disappointing that a character who is one of the most indomitable figures in the anime/manga is one of the worst within the game. His animations may be cooler than Rui’s, but Akaza has little else going for him.

Rui is a solid addition. He brings a new style of fighting to the competitive scene. He is very unique and offers a glimpse into how demons like Yahaba will play if she is added. Overall, I am eager to see how future demons will play. I hope Cyberconnect2 will release a balance patch for the game and reign in some of these performance outliers (Rengoku and Akaza) on both ends. For our thoughts on Demon Slayer: The Hinokami Chronicles, check out our review. Who do you think they should add next? Let us know in the comments down below! 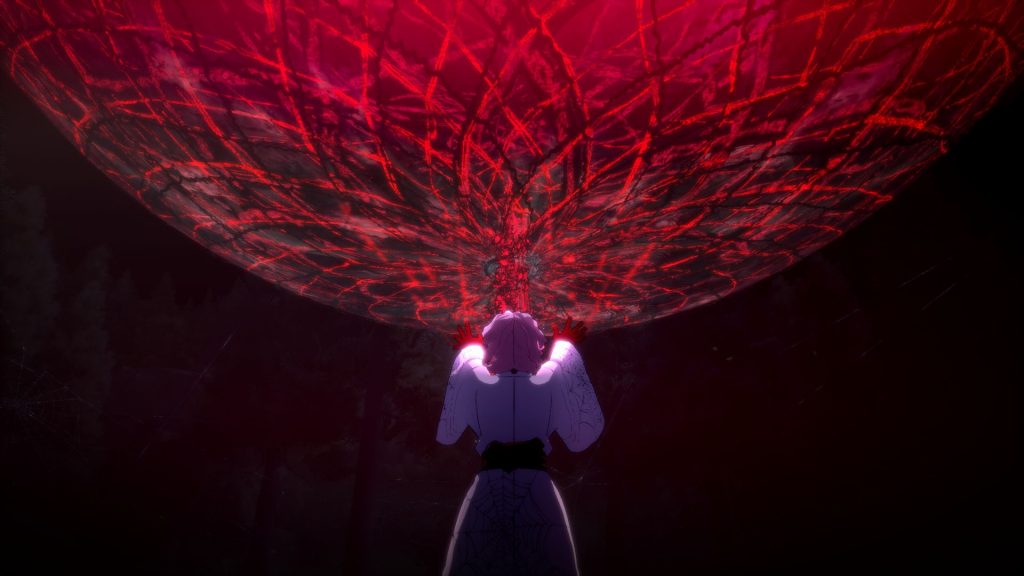