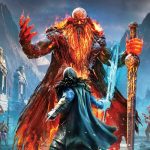 You are reading
Assassin’s Creed: Valhalla – The Eagle Brings Ragnarok

Assassin’s Creed is a long-running franchise. The action-adventure game has definitely reinvented itself since 2007. Ubisoft has stopped support after one season of DLC with recent titles for the series. However, recently they have pledged further support for Assassin’s Creed: Valhalla. Ragnarok is coming. Eivor’s story is not done.

Dawn of Ragnarok is the next major expansion for Assassin’s Creed: Valhalla. It is arriving on March 10, 2022. The adventure further explores Norse mythology. The series increasingly introduced more fantastical elements since Assassin’s Creed: Origins. Subsequently, Odyssey opened the door for the connection between traditional mythos and the Isu (the precursor, ancient race of the series).

The expansion trailer shows Odin on a quest to rescue his son. They are besieged on all sides by frost giants and denizens of Muspelheim. Odin shows off new teleporting and shapeshifting moves. Chiefly, they should serve as the main new abilities for players to acquire. Additionally, Odin absorbs energy from enemies they defeat. They command fire and ice. The opposition seems to stand little chance against Odin’s spear. Some may be confused why Odin is using Eivor’s model. Spoiler’s ahead will grant more context.

Assassin’s Creed: Valhalla introduced a direct connection between its protagonist and the Isu. Eivor enters a trancelike state with Valka’s help to relive memories of events leading up to Ragnarok. This questline reveals Eivor is actually Odin reincarnated. Odin and the other Aesir escaped their doomed fate of Ragnarok. They used some strange magic that would guarantee their survival. Odin gives a cryptic line of meeting them again.

Additionally, the trailer gives viewers a brief reminder of this fact. Odin is struck by an arrow. Then, the scene shifts for a second showing Eivor wearing Raven clan armor. The moment passes, returning to form. Strange texts surround the shifted scene. These are most likely Isu in nature. Lastly, the time frame is a continuation post-Ragnarok. Dawn of Ragnarok centers on the rescue of Baldr. Following the events of Asgard and Jotunheim, Odin will travel to Svartalfheim in search of his son. 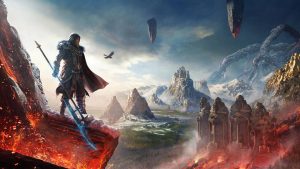 Lastly, free updates are coming for Odyssey and Valhalla. They feature a two-part questline. These quests will have Kassandra and Eivor meeting for the first time. Normally, this would not be possible. However, Kassandra is immortal thanks to the staff of Hermes (a piece of Eden). Kassandra is able to easily journey 1,500 years for this fated encounter.

While the two seem to clash, the quests will lead to their cooperation. Kassandra exploring more timelines is exciting. She is a fan-favorite among the community. Subsequently, she has the charisma and prowess to even rival Ezio Auditore. Finally, the title “Crossover Stories” hints at possible adventures for Kassandra in future quests and titles. Players can begin the crossover questline on December 14. The story begins in Odyssey and concludes in Valhalla. 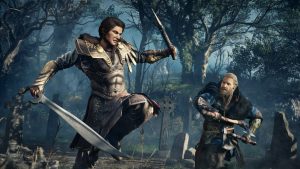 Assassin’s Creed: Valhalla continues to impress. It claimed the largest launch ever for the series. Additionally, it is Ubisoft’s second most profiting game. Therefore, it should come as no surprise Valhalla will have continued support. The crossover story is another surprise. This free update grants the world an even more intriguing narrative.

Kassandra is an amazing protagonist. She is personally my favorite from the franchise. Although, there are many who did not play Odyssey. To that end, Ubisoft has made Assassin’s Creed: Odyssey free to play from December 16-19. Afterward, it will be on sale seventy-five percent off for a time for those wishing to purchase. Lastly, Dawn of Ragnarok is available for preorder. Preordering grants players the “Twilight Pack” for Valhalla. Further info on both announcements can be found in Ubisoft’s blog post. Are you excited to continue your adventure as a Viking? Let us know in the comments down below! 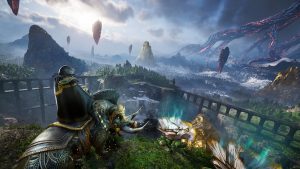