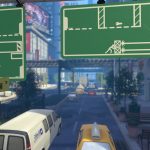 Developed by Skookum Arts, The Pedestrian is described as a 2.5 side-scrolling puzzle platform game. Players assume the role of, well a pedestrian. The game charges players to rearrange and reconnect public signs in order to explore and advance through each environment.

The game relies on using a node-based system. In this system, you must rearrange and connect public signs to solve unique puzzles. During your adventure, as you will travel through different parts of town solving puzzles and collecting mysterious pieces in your 2D metal sign.

For those who aren’t in the mood to read, you’re in luck, the game is mostly a textless journey. Where all ideas are shared in icons and your powers of observation will be put to the test.

The game is available on both Xbox and PC Game Pass. So, if you’re an Xbox Game Pas Ultimate subscriber, you can make the most out of your subscription and choose where to play The Pedestrian. Additionally, the game is also available on other platforms.

The Pedestrian retails for $19.99 and is now available on PlayStation, Steam, and Xbox platforms.