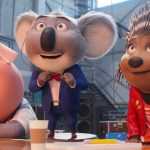 This past weekend moviegoers had no new movies to check out. So they went back and watched movies that had been out for the last month that they might have missed. They also gave Spider-Man: No Way Home another look keeping that movie at number one for the third weekend in a row. Marvel officially starts 2022 off with the number one movie.

The animated film Sing 2 stayed at the second spot this weekend. It was able to gross $19.6 million this weekend. This film is sitting at $144 million at the worldwide box office. During the pandemic, this is a healthy amount of money made for a movie. The Matrix Resurrections continued to slide down the box office. With an HBO Max release, you can see that most people in the domestic market watched it at home. Right now this film is sitting at $30 million domestic and $75 million in the foreign market. At this moment it’s sitting at $105 million in the worldwide market.

With a digital release coming tomorrow Ghostbuster: Afterlife was able to gross $1.4 million this past weekend. This film will not be crossing that $200 million mark at the worldwide box office. Morbius will be coming out in a few weeks. It will be interesting to see how the reshoots helped this movie in the Marvel/Sony universe.

This weekend fans will get one new movie in the theaters. While teams in the NFL are looking to make the playoffs and Marvel nerds are watching Spider-Man for the tenth time. The 355 will be the first movie to be released in 2022. January is the month for movies to go and die at the box office, so don’t expect this movie to gross much money.