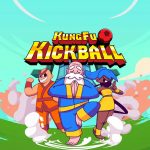 The beauty of video games lies in their diversity. For every complex game with intricate narratives or control schemes, there’s a simple one that you can pick up and play. Without having to worry about being too invested in the plot, or the difficult controls. Enter Kung Fu Kickball. No convoluted plot, no finicky controls. Just good old-fashioned all-around fun. Well, for a while at least.

Developed by Whalefood Games, Kung Fu Kickball is a team-based fighting sports game (it has possibly created its own genre with that!). The aim of the game is simply to punch, kick and headbutt the ball, or your opponents if you want to, in an effort to smash the ball into your opponents’ goal.

Doing so racks up points. And quite simply, the team with the most points at the end of the match wins. 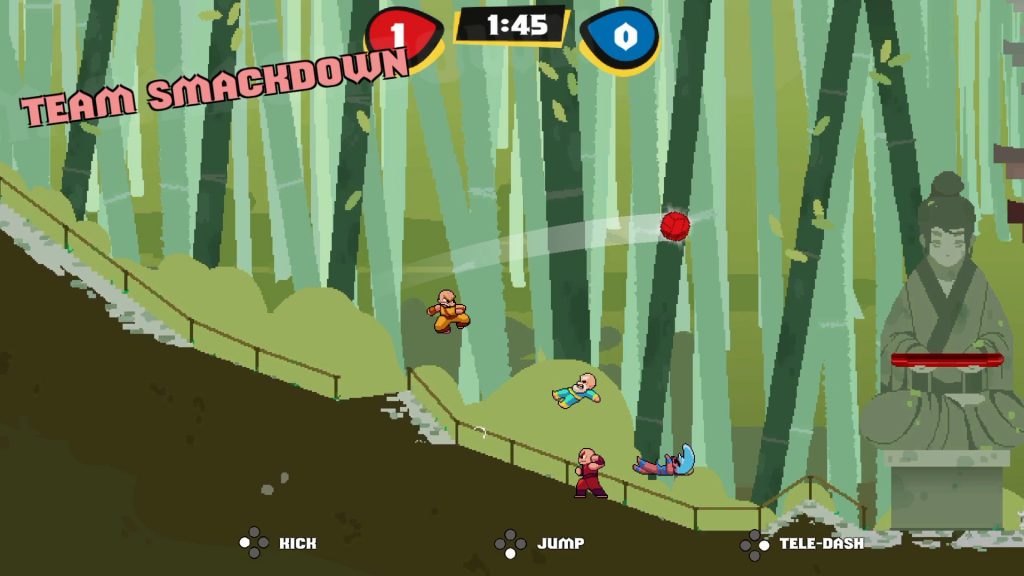 May the Best Team Win

As soon as the game is launched, you’re introduced to a simple menu screen. It is here where you can select from the different modes available and dive straight into a match. There is a brief tutorial in the Training Mode that will help you get acquainted with how to play the game. Overall, it does the job well enough.

As well as the Training Mode, you have Arcade Mode. Players can play this mode either solo with the CPU or locally via multiplayer. It doesn’t deviate from the formula though. You do a round-robin of playing against different characters in different areas.

Next on the list is Tournament Mode. As the name implies, this is where you can set up and compete in a tournament. Once again either solo or with CPU or a friend. You can also play in Friendly Matches and set your own match conditions. Here, players can choose from a range of custom options to spice things up. I found myself playing these customizable matches more than anything else. You can make some crazy, imaginative changes such as making the ball sticky or even changing the effects of gravity, leading to some extremely hilarious matches!

There are 3 difficulties for the CPU: Apprentice, Teacher, Master. They are appropriately balanced so that Apprentice will help you find your feet, while the Teacher difficulty will be more than a match for you. As for Master, it will probably have you slamming your controller into the wall after you get beaten for the umpteenth time! Most of my time was spent playing in Teacher which I found to be a good and balanced challenge.

You can compete in several themed arenas from flaming hot volcanos to forests. Each provides a colorful backdrop for the action to unfold.

The 2D ‘cartoony’ visuals give the game a distinct style and really help the characters to stand out. The opening cinematic in particular is really impressive. Despite being the only cinematic in the game, it sets the tone really well.

There are a handful of characters to choose from, including a couple that you’ll need to unlock by playing through the Arcade Mode. Each one has their own move set complete with a special ability. You’ll need to try them out to decide which fits your playstyle best, but some of my favorites include the Monk and the Panda (one of the unlockable ones). Both of these have handy special moves which can help you to tip the odds in your favor.

For Kung Fu Kickball, or any other competitive sports game that doesn’t have commentary, it’s really important that the music is just right. If not, it could ruin the whole experience, and become annoying really quickly. Fortunately, the soundtrack is excellent throughout.

Each arena has its own music which fits in with the theme and ensures the pulse-pounding action is complemented perfectly. Added to this are the sound effects. Every kick of the ball is satisfyingly felt. Hitting the opponent’s bell, which is effectively how you score, is met with an appropriately loud ring. The commentator’s booming voice, which occasionally comes to life when you score or if the game goes into overtime, is also suitably imposing, making sure your opponent would know you scored even if he was blind! 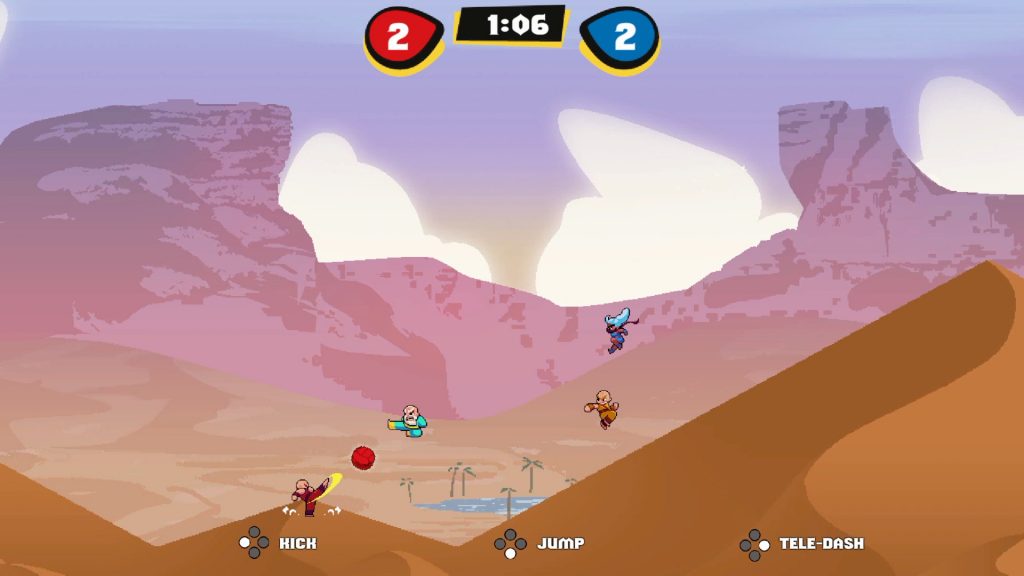 The controls are wonderfully simple. You have a basic attack button, but by hitting different directions on the analog stick with it, you can manipulate the direction you hit the ball in (pressing attack and up hits the ball up, etc). There’s a dash button, which does what it says on the tin, and a jump button that cleverly sends the player higher into the air the longer you hold it.

These controls are simple enough that anyone can just pick up and immediately play. But there are a couple of nuances that ensure there is ample reward for practicing. Not only can you manipulate the direction of the ball, but you can also use your character’s special move. This will either send the ball rocketing in the direction of your choice, or incapacitate the opposing players if you’d prefer, giving you a clear route to the goal. This in-game decision-making ensures you need to be switched on at all times. No doubt it was one of the more satisfying elements of the controls.

The action can be enjoyed solo, or multiplayer- both local and online, with 1v1 or 2v2 options. The online multiplayer works exactly as expected, with minimal lag. It did take a while to find matches, but considering the game hadn’t been fully released on all platforms at the time of playing, this isn’t too much of a concern. 2v2 matches turn into frantic, adrenaline-fueled contests which are sure to bring out your competitive nature! As fun as it can be to play against the CPU, as with many sports games, nothing beats playing real live human opponents. Victory always tastes sweeter when they’re against a real person.

After the adrenaline has worn off though, you will probably find yourself starting to tire of Kung Fu Kickball if you’ve played it for a long period.

It undoubtedly suffers from a lack of game mode variety. Aside from the customizable friendlies mentioned above, and the Training Mode where you can do target practice, there is simply nothing else to do here.

You can’t help but wonder if the developer could’ve possibly added a couple of different game modes to spice things up a bit.

Things like Volleyball, keepy-uppies, and Basketball all spring to mind as potential game modes here. They would’ve fitted into this world smoothly. It probably wouldn’t have been too much of a stretch to add some of them in. Perhaps this might come further down the line as DLC. 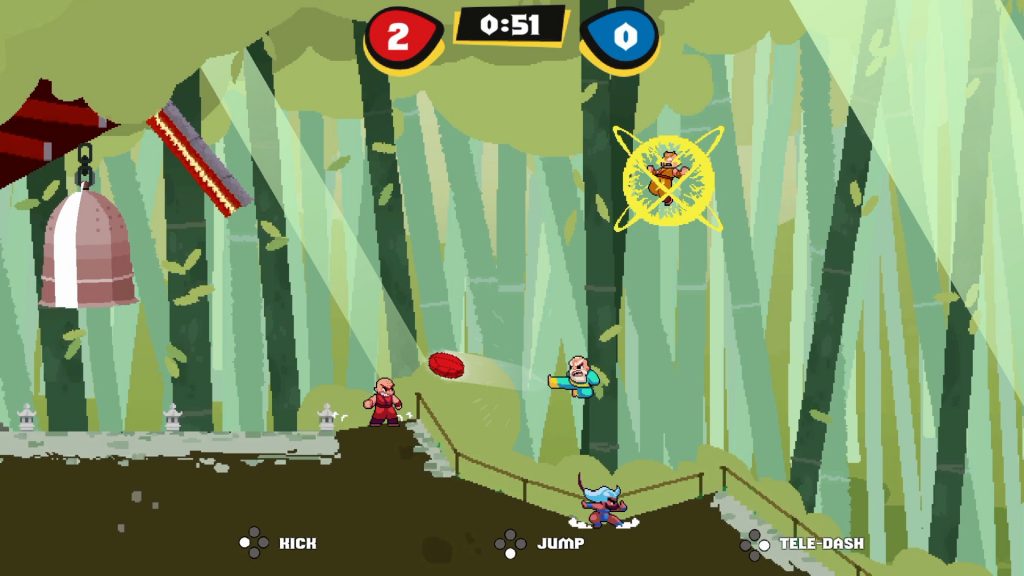 Without doubt, Whalefood Games, which impressively consists of just the creator Jonah Wallerstein, created a really fun, enjoyable game here. It is perfect for groups of friends to kick back and enjoy playing together while getting competitive and providing some real laughs along the way. While it definitely has a limited shelf life, your time spent with Kung Fu Kickball will be remembered fondly. You’ll no doubt keep it stored away for parties when you can prove you’re the best once again!

For more information check out LOGNET’s video interview with the developer below:

6
A fun, enjoyable take on a simple concept. Lacks variety.