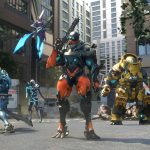 Sometimes it is incredibly hard to explain a game to a friend who has no context about the game before. We often find ourselves comparing it to other similar-styled games or even movies for a point of reference they might be familiar with. Sometimes though, some games are so out there that you simply cannot compare it to anything else. The newest upcoming game from Capcom simply titled Exoprimal. Which looks to blend mech suit co-op combat against brutal and vicious dinosaurs.

Revealed during today’s State of Play, we got our first look at Capcom’s new multiplayer-focused IP. Coming exclusively to PlayStation 4 and PlayStation 5 in 2023, Exoprimal is a co-op action game where players will team up to battle a wide variety of monsters. Taking place in a fictional 2043 a mysterious vortex has opened and filled the world with deadly prehistoric monsters that players will have to battle and slay.

With each Exosuit having a unique skillset players will have to work together in order to succeed in Exoprimal. In a unique twist, players will be able to switch suits on the fly during gameplay. This means that you will always be prepared no matter what situation you find yourself. While the concept feels very far-fetched, it ultimately feels like it could be an absolute blast. You can find the full 4k announcement trailer below.

Are you interested in Exoprimal? Let us know in the comments and don’t forget to check back for the latest gaming news and information.