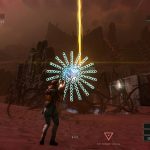 You are reading
Returnal Gets A Big Free Update

There was a wealth of new announcements during today’s State of Play event. While the showcase was primarily focused on the talented Japanese publishers that PlayStation has partnered with. But if you were a fan of Returnal on PlayStation 5 from Finnish developers Housemarque. Then you should be incredibly excited for its new Ascension update.

In a new PlayStation blog post it was revealed that Returnal will be getting a massive free update later this month. This update will bring a host of bug fixes alongside some pretty big new features. The first many players will notice is the introduction of co-op. Players will be able to host and join each other’s cycles. This feature can be accessed by new portals that are located throughout the world. Players will also be able to host private lobbies if you specifically only want to experience Returnal with your friends.

Another big addition will be the new endless mode called Tower Of Sisyphus. Given Housemarque’s history with making arcade-style games, this new mode feels like a perfect fit. Players will progress against endless hordes of enemies and bosses until they become overwhelmed and perish. The mode will feature a scoring system allowing players to chase and compete with each other for the highest score. You can see more of the upcoming update in the 4k official trailer below.

Are you excited for Returnal’s new update? Let us know in the comments and don’t forget to check back for the latest gaming news and information.