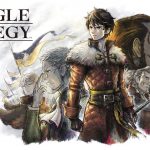 You are reading
Triangle Strategy Combat Guide for Beginners

If you’re like me and haven’t played much of the tactics genre, Triangle Strategy will be hard to adjust to. Maybe you picked it up on a whim or watched a review from a YouTuber. You spent your money but you want some guidance. Well, look no further! As this guide will come from someone who has poured over fifty hours into the game and is a novice at this genre. Now, let’s get started!

1. Failing in Triangle Strategy is an Option

You’re not going to conquer every combat encounter in Triangle Strategy on your first try (depending on the difficulty you choose) and that’s ok. However, as the combat in the game can be very unforgiving, it can also be very rewarding, even if you fail an encounter. How so you may ask? If you fail, you retain anything earned in the encounter. Such as Kudos and experience points. You will also recover any spent items as well. So don’t be afraid to fail, you’ll be very rewarded for it.

Positioning in Triangle Strategy is vital to victory. When you move a character, you’ll see if they’re in range for enemies to attack them. If they are, try to have them face a safe direction. If an enemy gets behind the character, they will always deal critical damage to them. Positioning goes beyond this though. As combat arenas can have elevation upwards and downward. Upwards attacks are more accurate while downwards attacks are the opposite. 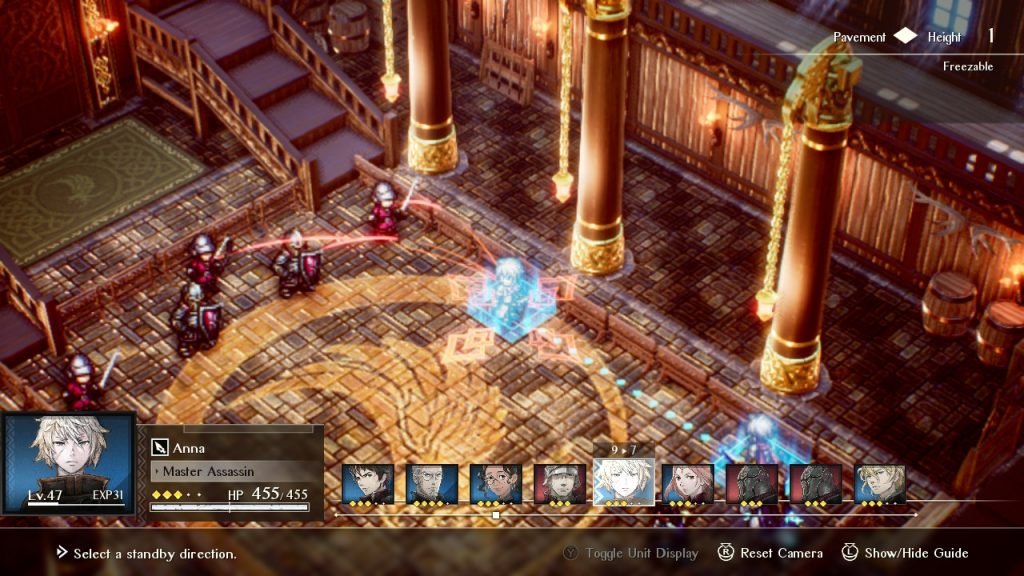 However, as enemies have these advantages, so do you. Additionally, if you have one character behind an enemy while a character is in front of them you can do a double attack. This works sideways as well. If you surround a boss, you can simply trap them in a never-ending pain train. Bow users, such as Hughette and Rudolph, can initiate double attacks if they strike an enemy from afar. Positioning is key, so make good use of it. 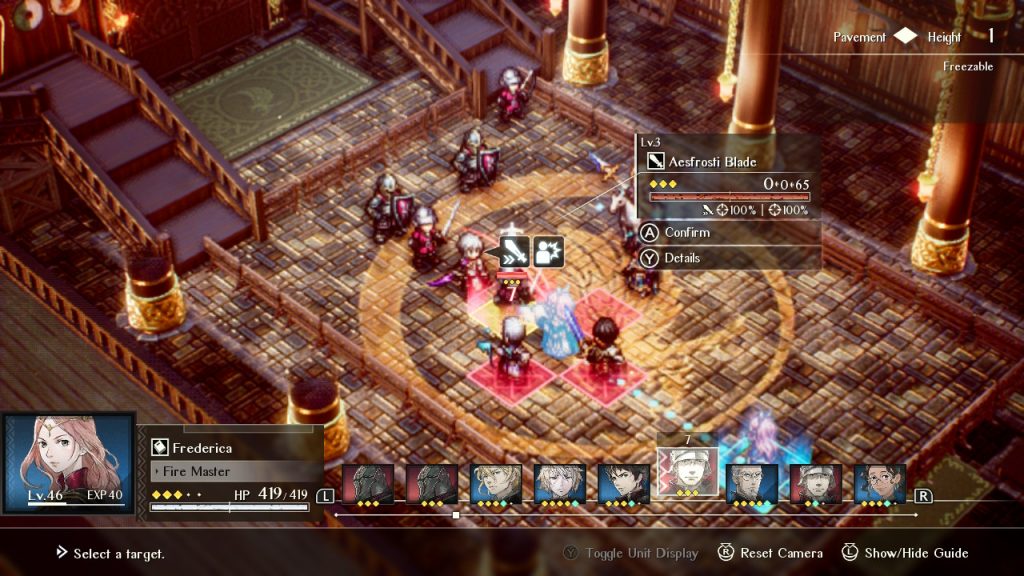 3. Take Advantage of your Characters

Don’t be afraid to use your character’s abilities. They are not single-use, they use a resource called “TP” that regenerates on each of their turns. For example, if you’re using Anna, you can have her move to a spot, use “Take Cover” which shrouds her for two turns, and if you haven’t reached the enemy you’re going after in those two turns you can use the ability again.

Certain abilities do require higher amounts of TP. Like Roland’s “Four Dragons” which is a high damaging, resistance ignoring attack. So to use it you will have to use standard attacks to build up TP.

4. The Arenas are your Friends

Every combat arena in Triangle Strategy is unique and hosts its own mechanics. A wheatfield can be lit on fire by one character and the next turn you can spread it by using a wind spell. Creating a wall of damage enemies will refuse to cross. Some arenas have pools of water that you can cast lightning spells in to damage everyone within it. As well as some levels having unique traversal mechanics, like minecarts or ziplines. Take notice of everything the arena has to offer and use it to your advantage, just like positioning.

5. Go for the Objectives in Triangle Strategy

Don’t be a hero. Seriously, don’t try to bite off more than you can chew if you don’t have to. Certain encounters will have objectives you have to blitz through. Some will be simple, like killing a boss or going to a certain location. While others will require to eliminate enemies in a location and get your characters to it before more enemies get to that location. Some are even more difficult, like not allowing enemies to get to a certain location, or having to diffuse bombs. Play smart, not hard. Go for the objective and not every single enemy you see.

6. In Triangle Strategy To the Victor go the… 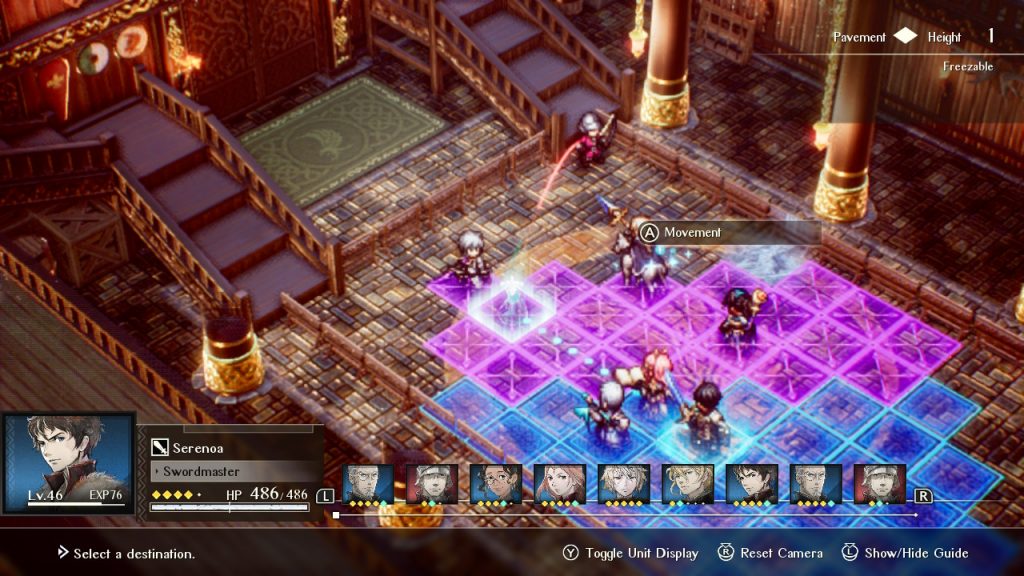 In Triangle Strategy, loot can be dropped by defeated enemies. To claim these, you will have to position a character over it. Sounds easy enough, until an enemy swipes it. You will need every resource you can get, and if an enemy claims it there’s a chance you won’t get it back. Luckily one character in the game can collect these items by just walking over the bag but you will have to do certain things in the story to get them. Until then, keep your eyes on the prize.

7. Finally, Make use of the Encampment in Triangle Strategy

The encampment in Triangle Strategy is an important part of your journey. It features a place to spend your kudos, take on optional fights as many times as you like to level up. As well as upgrade your characters so long as you have the resources to do so. Don’t hesitate to go here and upkeep your roster. You’ll need everyone in tip-top shape if you hope to survive. 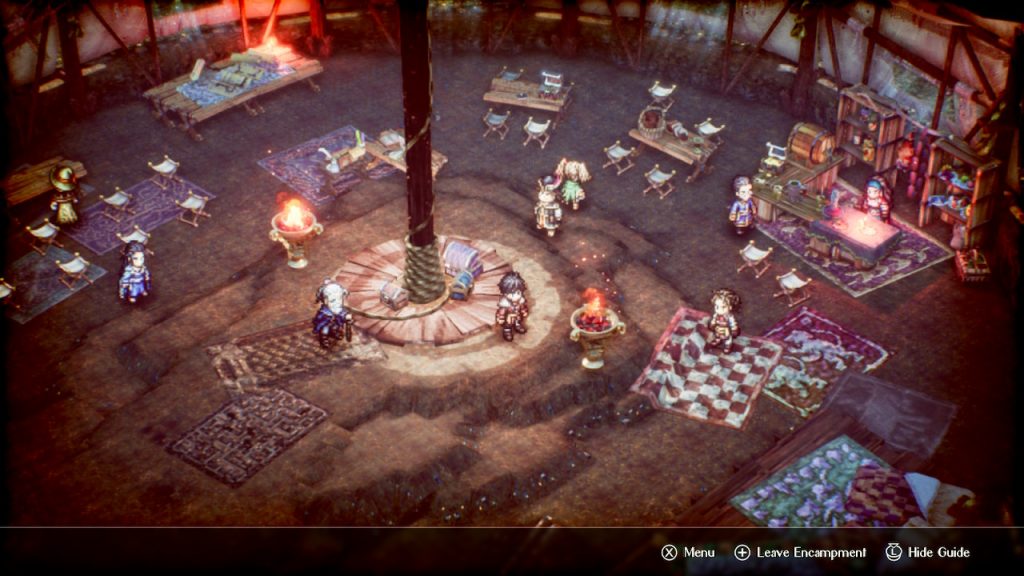 Was this guide helpful? Do you have any more questions that weren’t answered? Let us know in the comments below!