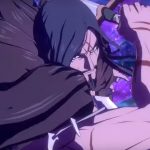 DNF Duel releases next week. This 2.5D action-fighting game brings new life to Dungeon Fighter Online’s world. Chiefly, with its use of unique fighters within the fighting game format. Characters are a prime marketing incentive for fighting games after all. Here is DNF Duel’s final roster.

First, combo trials should be mentioned. ArcSystemWorks held a stream recently only in Japanese. There, they showcased the remaining fighters and combo trials. Combo trials walk players through combo routes. Eventually, mastery over a fighter will be achieved. Find the full stream here.

Launcher sports a new look in DNF Duel’s final roster. Additionally, She excels at all ranges with her array of weapons. This means Launcher is a zoner that can challenge from anywhere on the screen.

Troubleshooter is next. His playstyle dominates the mid-screen. Specifically, Troubleshooter alternates between his shotgun, sword, and explosions to win. His devil-may-care demeanor is also a plus.

Swift Master continues the fun. He fulfills the wind mage power fantasy. His wind specials are devasting once on target. Meanwhile, he can set wind traps for combo extensions. Definitely a fighter with a fun game plan.

Enchantress follows next. She mixes magic and puppetry to oppress her opponents. Consequently, her puppet can be used for offense and defense. Enchantress’ mix-up potential seems both fun and rewarding from her trailer.

Lost Warrior rounds up DNF Duel’s final roster. This boss-like character is the definition of quick thinking. Specifically, his specials allow for cross-ups, highs and lows, and impressive setup potential. Definitely a fighter I aim to pick up.

DNF Duel releases June 28th. Soon, players take to the arena in a new medium. The developers have implemented much time and care into the title. This is evident in how unique and amazing each fighter is. Hopefully, it will deliver across all avenues upon release. Which fighter are you excited by the most? Let us know in the comments down below. For all things DNF Duel: bend the knee in the realm of Lords of Gaming.