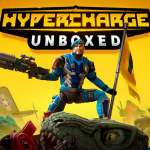 You are reading
A First Look at Hypercharge: Unboxed

Hypercharge: Unboxed feeds off nostalgia, but in a good way. If you were born in the 80s or early 1990s, you’d probably remember the original Toy Story, or better yet, a movie called Small Soldiers. What these two movies have in common is that both center around toys that come to life. The latter, in particular, is more representative of Hypercharge, as the movie pits warring factions of action figures and toys against one another. If that sounds appealing to you, then look no further than what Hypercharge: Unboxed has to offer. Check out Lords of Gaming’s first impression of this impressive title. 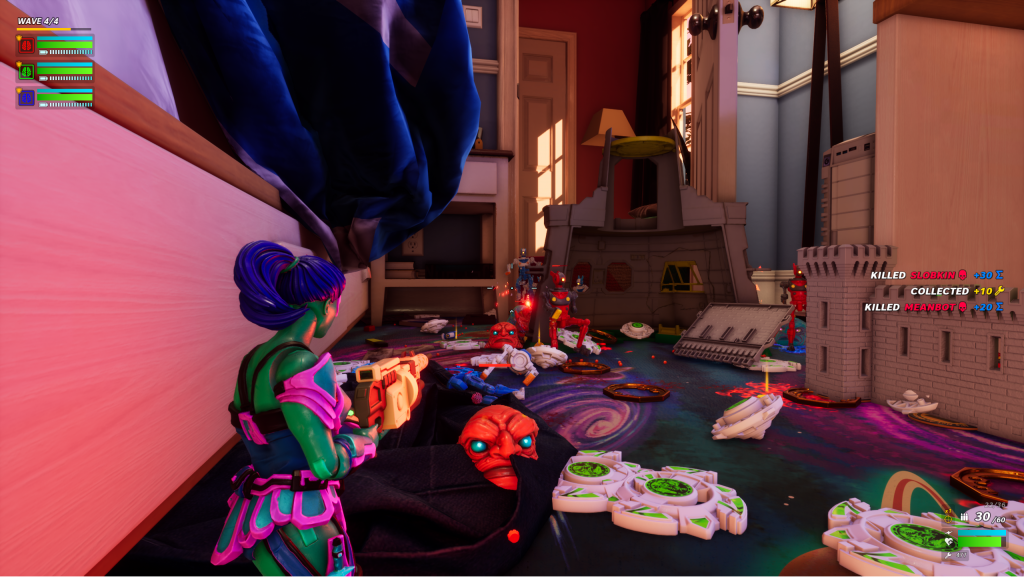 Hypercharge: Unboxed has a rather simple concept in its foundation. You play as an action figure tasked with protecting hyper-cores from waves of dastardly toys that are out to destroy them. In between each wave, you can build defenses to better protect your hyper-cores. The game offers both first-person and third-person perspectives.

Hypercharge: Unboxed provides different modes to its players. There is the offline adventure mode, where players can familiarize themselves with the different levels and mechanics of the game. There is also an online co-op with different difficulties to choose from that encompasses all skill levels. You can even play offline against bots if you want to hone your skills. There’s even an online PVP mode if you want to go Red vs Blue.

All the modes are a blast to play and there is an active player base on Steam that will make sure you’ll usually find online matches. PVP matches though were quite challenging, but I expected that and it didn’t dampen my enjoyment. However, after some time the game might wear you out, as the modes get repetitive in the end. Despite this, the developers are steadfast in providing hotfixes and content for Hypercharge: Unboxed. 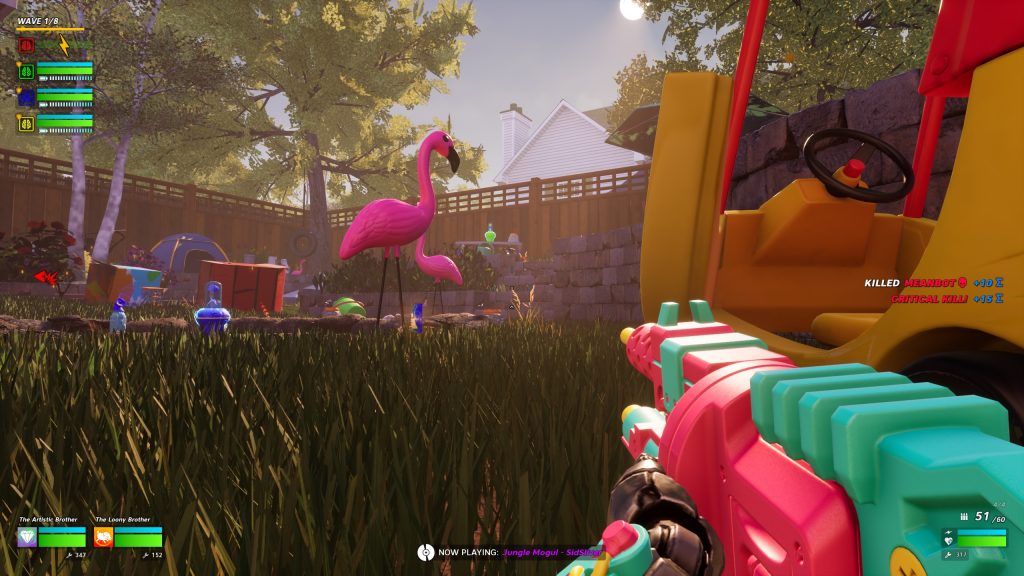 The game’s shooting mechanics are on point, though switching weapon types was confusing at first. The shooting mechanics were satisfying. Every different weapon variant has its own distinct recoil and it was easy to learn how they operate. Traversal was a breeze as well. You can jump, double jump, vault on edges, and pull yourself up. It was all very intuitive. The controls are easy to grasp and the game does a good job of introducing all the mechanics early on.

The game’s weapon system is also simple but can be confusing at times. You only have one primary weapon, which is the rifle, and to change it, you pick up different attachments found in levels. Attachments could be scopes or different weapon types such as flamethrowers, grenade launchers, LMGs, sniper rifles, and more.  However, sometimes you can pick up a weapon attachment and it will allow you to switch between two weapon types. At first, it wasn’t clear which attachment was switchable or not. But in the end, I grew accustomed to it. Luckily, the game’s defense-building mechanics are straightforward.

Hypercharge: Unboxed provides different defensive items for you to deploy. Everything from walls, poisonous leaves, turrets, and more can be deployed to protect your hyper-cores. Better yet, it’s easy to build them, and no, thankfully,  it’s not like building in Fortnite.

There are allocated plots where you can build your defenses, some plots are specific for turret-type defenses. All you need to build is enough build credits that you find across the level, a battery attached to your hyper-core to power your defense, and you can build away. It’s simple and I got a grasp of it quite quickly. 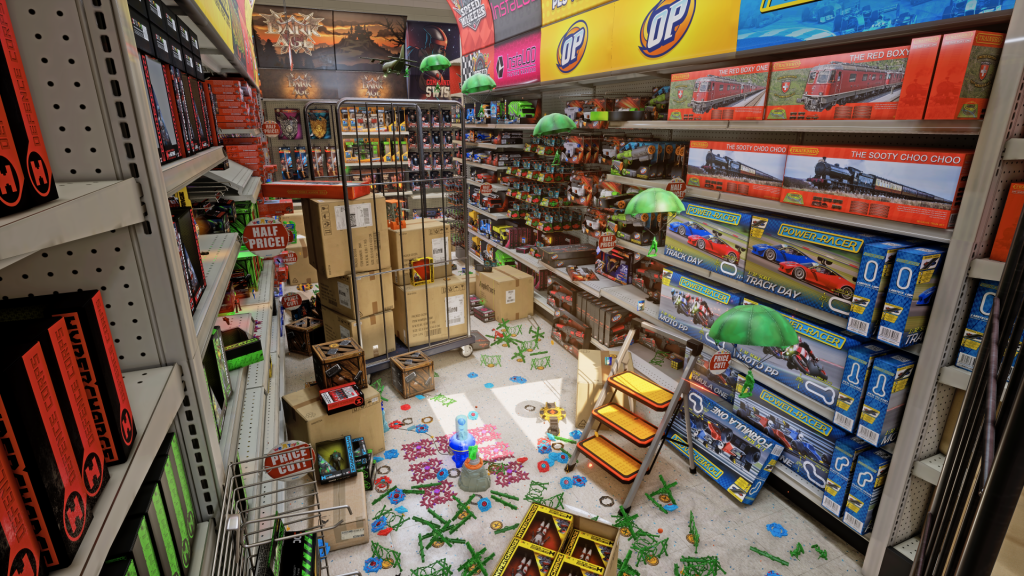 The levels are quite diverse and are a joy to play in. There is a bedroom, bathroom, garage, backyard levels, 90s toy store, and even an air hockey table, and more. Each one is great to explore to find various collectibles that will unlock cosmetics and diorama pieces for players to check out.

One level in particular that stood out to me is the bedroom. There, will you find plenty of easter eggs and pop culture references that sometimes took my eyes away from defending hyper-cores. You’ll find references to Jurassic Park, Acer monitors, and even the front page of the PC Master Race subreddit gracing the screen. You can tell a lot of love was poured into the level design. It was a joy to explore them between waves and I highly recommend you do the same. 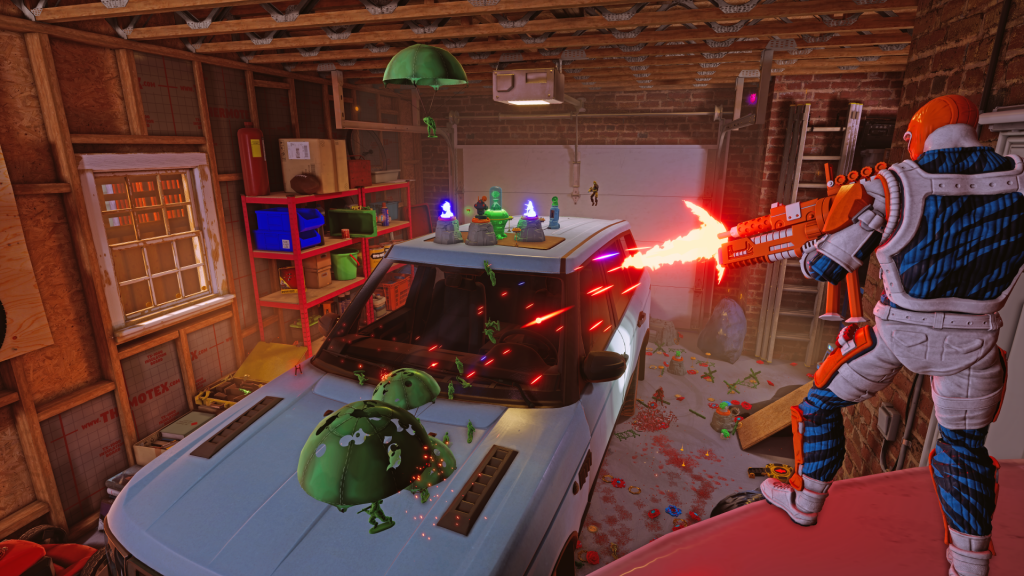 Hypercharge: Unboxed was built using Unreal Engine 4 and it shows. The game is, surprisingly, quite the looker. All the assets, character models, and levels were well detailed and consistent in design. You really do feel like an action figure and the developers did a great job of replicating their perspective in the game world. Even when you look at mirrors there are real-time reflections, albeit they are blurry, but still impressive for an indie game. Best of all, it ran well.

My rig was easily hitting well above 120 FPS on ultra settings with no sweat. It seems the game is well optimized on PC with modest system requirements. I didn’t experience any strand frame drops or stutter during my time with the game. 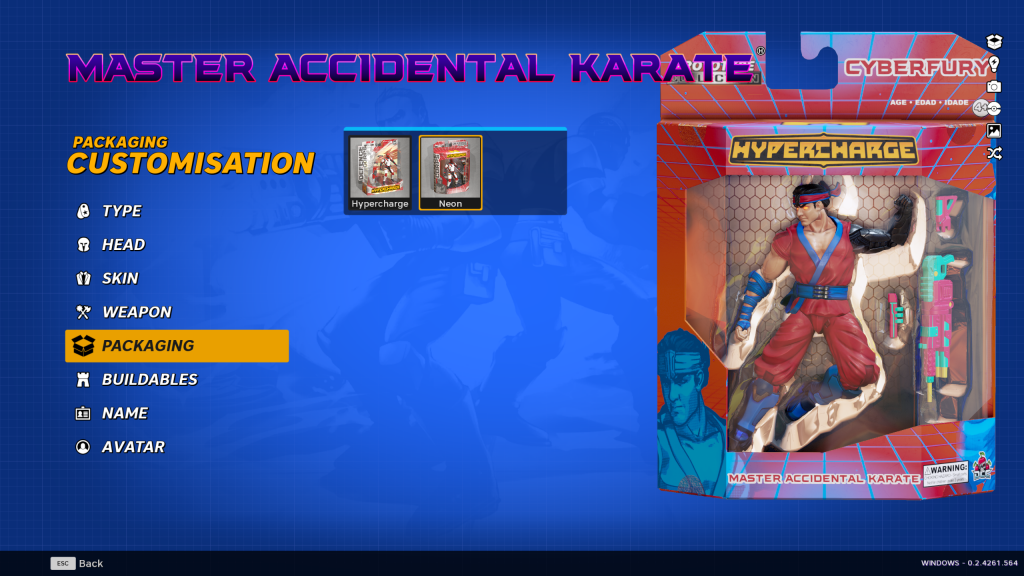 The game offers a ton of unlockable cosmetics through progression. In addition to getting new action figure types, you can also change up their head style and body design as well as different color schemes. Even their casings also change up when you select a new color theme, which is a nice touch. In addition, players can also unlock different diorama pieces to check out from the main menu. Best of all, there isn’t a single microtransaction in the game. All the cosmetics are unlockable in-game.

It’s easy to tell that developers Digital Cybercherries put their heart into the game. There’s a lot of great attention to detail in Hypercharge and it plays well. The game could use some new modes or additional content to keep things fresh. However, at its $19.99 price point, the game is a lot of fun and there’s a lot to love when it comes to Hypercharge: Unboxed.

Hypercharge: Unboxed is available now on Steam and Nintendo Switch.