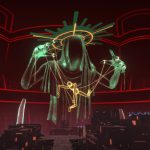 Iron Lords Podcast and LOGNET’s very own Lord Cognito is live on the Pax West show floor to give us the latest sneak peeks, developer interviews, and more. One of the unique games out on the show floor this year was Mato Anomalies from Arrowiz Games. A turn-based RPG that draws the instant comparison in its style to such classics as Persona, but with its own twist. Cognito was able to sit down and discuss with the developers the intricacies of the game, as well as showcase a brief look at the game in action.

Here is a brief synopsis of Mato Anomalies from the Steam store page.

“Mato Anomalies is a turn-based RPG that takes players on a journey across Mato, a fantasized neo-futuristic version of a bygone oriental city. Take control of the Dual Protagonists Doe and Gram to investigate strange anomalies around the city, or venture into rifts to battle demonic abominations determined to bring about the city’s downfall.

Team up with unlikely companions and unravel the dark secrets in this story of Duty, Hope and Justice.”

Don’t forget to check back for our latest coverage from PAX West. From interviews, gameplay, and much more.