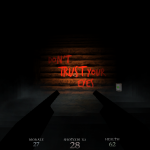 You are reading
Dusk Could Be Making Its Way To Xbox and PlayStation Soon?

If you play FPS games on PC it is likely you have heard of New Blood Interactive. The Indie publisher has a knack for publishing some of the most unique FPS Indie titles available on PC. From the gothic-inspired Gloomwood to the Heretic styled Amid Evil. New Blood has been a part of a large push to bring back what has been referred to lovingly as “boomer” shooters. While the publisher has a wide variety of titles under their belt, until the release of Dusk on the Nintendo Switch in 2021. They had never released any of their titles on console, but it looks like that will be changing in 2023.

It was previously announced by the New Blood Twitter account in 2022 that Xbox and PlayStation versions of Dusk were in the works. For those that are not familiar with Dusk imagine if you combined old-school Quake with cult classic Redneck Rampage. With a dark and simple narrative, combined with kinetic and fast-paced gunplay the gameplay loop is simple but addictive. I have written at length about why Dusk is one of my favorite FPS games in recent memory. The idea of more people being able to experience this game is exciting, especially with how well the Nintendo Switch port of the game was received by fans and critics.

While there is no official date for when Dusk is coming to Xbox and PlayStation other than that the game is indeed coming. Dave Oshry the head of New Blood Interactive, and certified meme connoisseur put out a Tweet teasing that they are hard at work on the ports. Could we possibly see the Xbox and PlayStation ports of Dusk this year? It certainly feels like it could be a possibility. New Blood is set to have a big 2023 with games like Gloomwood which has been well received in early access as well as the upcoming Fallen Aces. A title that combines 1930’s gang thuggery with FPS teeth-punching action. I will certainly be keeping an eye out for any news about the console ports of Dusk in the coming months.

Will you be checking out Dusk when it comes to consoles? Let us know in the comments and don’t forget to check back for the latest gaming news and information.