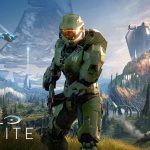 You are reading
Halo Infinite multiplayer will be free-to-play

After many hints and rumors circling around the social networks, it is now officially confirmed that Halo Infinite multiplayer will be free-to-play and will support 120 fps mode!

Halo is for everyone. We can confirm #HaloInfinite multiplayer will be free-to-play and will support 120FPS on Xbox Series X. More details will be shared later! pic.twitter.com/9bIrppFiON

I have been a long time supporter of the idea that Halo should continue to evolve as an eSports title meaning, in between the other things, that 120 fps support could be beneficial if not crucial on the next-gen Xbox. 120 fps gaming adds not only visually pleasing smoothness but also lowers the input lag thus adding an advantage to your hand. You might be thinking that the advantage is unfair and unnecessary with cross-play disabled, but my guts tell me that there will be a lot of people using the Xbox Series X in cross-play enabled mode. There will not be only players with controller input, but also with a mouse and keyboard. I am not saying that PC gamer will suddenly stop using their PCs and move to Xbox, but if you compare what you get for the amount of money I believe that Xbox (as a device) has just become a much more desirable toy with this Halo announcement.

Free-to-play, on the other hand, was heavily rumored in the last few days and it was only logical that 343 would stop the rumors and simply put the word out there. What does it mean exactly? We have no confirmation, but a certain logic dictates that Microsoft is going for the big numbers like Call of Duty. There is no denying that Call of Duty is a huge franchise that became even more gigantic with free-to-play Warzone addition. My guess is that Microsoft will try to emulate much of this system, meaning that you will either buy the single-player campaign or rent it via GamePass while the multiplayer will be free-to-play with a BattlePass system in place. Mind you, this is not confirmed by any means, just my own five cents.

The next big question is whether free-to-play will be paywalled with Xbox Live Gold like up until now or will there be any changes? I have been rooting for the idea that online multiplayer should be completely free on all consoles, and there are certain people who either agree with me or know something that I don’t.

Xbox Live Gold is going away and playing online multiplayer will be free. They will not force you into Ultimate to play online.