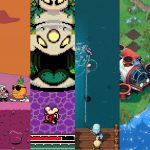 Every year we like to look ahead at some of the best indie games coming out each year. This year we are seeing a little bit of a trend where small developers who released cult hits at the beginning of the 2014-2018 indie boom are now coming back with their second game. Studios that made games like The Messenger, Shovel Knight, and Hollow Knight are back. Plus as always we have scrubbed the darkest corners of the internet to see what else we can find.

If you are a fan of indie games, follow the social channels for Lordsofgaming.net. This is just the beginning. This Spring we plan to play as many as 50 new indie games at conventions and we believe that this summer there will be another large batch of indie games through “E3-Like” events. For now, take a look at the list we have below of our most anticipated indie games of 2023.

Sea of Stars should be on everyone’s indie games of 2023 list. Back in 2018, Sabotage Studio released the indie hit The Messenger. The NES-inspired action Metroidvania became an award-winning sensation overnight. This year they are back with a SNES-style turn-based RPG. The art style is as beautiful as you could imagine coming from the genre. There is dynamic lighting with day and night cycles and there are six developed party members. Plus Yasunori Mitsuda, the composer behind Chrono Trigger is contributing to the score of the game. Sea of Stars will release at some point in 2023 on Steam, PlayStation, and Nintendo Switch.

Firewall Ultra is one of my most anticipated indie games of 2023. A PS VR2 exclusive re-release of Firewall Zero Hour, Firewall Ultra will have improved visuals and take advantage of the new PS VR2 hardware. The team has promised a complete overhaul of the levels as well as the characters. Some of the new content will include a PvE mode, new contractors, and maps. For those that have not played Firewall yet, it is a 4v4 shooter. It is very similar to “Search and Destroy” in Call of Duty. Once the dust settles behind the PS VR2 launch with Horizon Call of the Mountain, Firewall could be the next big VR hit.

After years of releasing Shovel Knight content, Yacht Club Games’ next adventure is going to be Mina the Hollower. Almost a year ago, the team took to Kickstarter in hopes to re-create the magic they had with Shovel Knight in 2014. Within 24 hours the game was funded and over 21,430 people raised $1,239,584. This time around the team is creating a Gameboy Color era-inspired retro game. The game takes place in a 1700s gothic horror setting and you play as Mina a Castlevania-inspired mouse.

Coming to consoles and PC this May, Wrestlequest is an RPG adventure game that features 90’s Professional Wrestlers. We played Wrestlequest at PAX East last year and the turn-based RPG mechanics are solid and the game is hilarious. How well the team at Mega Cat Studios has nailed each element puts this game on our indie games of 2023 list.

This 2D action-adventure platfomer should be out sometime in 2023. While there may be 2D side-scrolling Metroidvania fatigue, Pepper Grinder has a ton of interesting action. Plus it is being published by Devolver Digital and you know they do not miss.

Coming to all consoles and PC later this year The Plucky Squire trailers show a lot of promise. You play as Jot and you jump back and forth between a 2D and 3D world. The 3D world is incredibly detailed and photorealistic while the 2D world is hand drawn. This unique take on level design is why it is so important to support indie games. That is why The Plucky Squire is included in our indie games of 2023 list.

Wizard With A Gun

Wizard With A Gun might have one of my favorite titles of all time. The studio Galvanic Games out of Seattle is home to less than 20 developers. Wizard With A Gun is a top-down survival shooter with a modern comic book art style. While we do not have a date yet, as of now, Nintendo Switch and PC players can expect to play sometime in 2023.

Terra Nil is a reverse city builder. From starting with nearly nothing you will have to rebuild a biodome of mother nature. Yet there is a catch, the tools, and machinery used to restore the ecosystem must be removed prior to the end game. So as you are rebuilding you must plan your exit. This strategy sim builder is one of the coziest games I have ever played. The music and vibe created by the plant life make for one relaxing experience. Terra Nil is coming to mobile via Netflix, as well as PC. In the meantime, you can read our preview here.

El Paso, Elsewhere makes the interesting choice to pay homage to Max Payne. The team at Strange Scaffold pulls no punches as the game has a ton of gore and a soundtrack that thumps. El Paso, Elsewhere will release on PC, PS4, as well as Xbox sometime in 2023. If you are a fan of games like Max Payne and BloodRayne you have to check this out. This unique take makes it one of the most interesting indie games of 2023.

Pizza Tower releases on Steam on January 26th, and this is something we would love to see on consoles later this year. The developers at Tour De Pizza say the game is heavily inspired by Wario Land. The retro gameplay is perfectly paired with an art style you would recognize from Ren & Stimpy and Rocko’s Modern Life. Pizza Tower seems like a perfect game for the Steam Deck if it never comes to the Switch.

The Big Catch was launched and funded within a few months in the fall of 2022. It has managed to raise over $180,000 from 4,440 backers. The Big Catch is a 3D platformer all about tight expressive player movement, exploration, and fish. It is heavily inspired by retro platformers like Rayman, Ape Escape, Chibi-Robo, and Mario Sunshine. While The Big Catch has just ended its public crowdfunding phase, the team still expects to launch in September of 2023 on PC and the Nintendo Switch.

Hollow Knight: Silksong is one of the most anticipated indie games of 2023. Somehow out of all the 2D Metroidvania’s that released, Hollow Knight has managed to top them all. While there is no release date yet, Silksong is targeting a 2023 release on PC, PlayStation, Nintendo Switch, and Xbox.

Party Animals is coming to PC and Xbox sometime in 2023. It reminds me of the Capcom brawler Power Stone but with adorable animals. The Xbox console exclusive could be just another game that hits the store and is forgotten about the next day, or it could become the platform’s Super Smash Bros. The game has been delayed for over a year, although now the latest trailer we have included has marked the game for “Early 2023.” Party Animals is off to a promising start, as it is the fourth most wishlisted game on Steam just behind Starfield.

Deliver Us Mars is the follow-up to 2018’s Deliver Us The Moon. It is a narrative-heavy sci-fi adventure game from a small Dutch studio. KeokeN Interactive is headed by two brothers and their passion for games and space. Deliver Us The Moon is available just about anywhere, there is an updated release on PS5 and Xbox Series X that has ray tracing. Once you finish that, Deliver Us Mars will be available on PC, Xbox, and PlayStation on February 2nd.

Every once and a while there is an indie horror game that becomes popular through Twitch. I think My Friendly Neighborhood has a shot. Also, there is a demo up on Steam you can play now. We played it last year at PAX East and I thought the little hints of Resident Evil and Bioshock were enough to keep people playing. That alone gives My Friendly Neighborhood credence to be on our indie games of 2023 list.