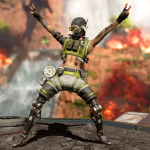 You are reading
Apex Legends Battlepass is Here

A month and a half after Apex Legends came out of nowhere to be the gaming story of the year, the heavily anticipated Season One “Wild Frontier” Battlepass has come with the first new legend, Octane.

Octane is all about height and speed. His standard ability lets him sacrifice some health to run faster, his passive lets him gain said health back over time and his ult lets him drop a springboard to let other players scale buildings and other major heights. Like Mirage and Caustic, he will be available for purchase with Legend tokens or 750 Apex Coins ($7.50 in US currency).

The Wild Frontier is here, and so is our first Battle Pass. Learn more about the badges, skins, and voice lines coming your way: https://t.co/2ppF4L1WfM pic.twitter.com/CH4UevrY3G

As for the Battlepass itself, the base Battlepass costs 950 Apex Coins ($9.50), but the Battle Pass Bundle goes levels further, 25 to be exact, and unlocks 25 levels for the Season One Battlepass (costs 2800 Apex Coins, equal to $28). Cosmetically, there are new skins for Wraith, Lifeline, and Mirage, new weapon skins (some specifically Epic or Legendary), quips, banners, trackers, etc.

You do not need to buy either pass to get access to Season One, and as a matter of fact, anyone who even plays Season One of Apex Legends will get a Season specific skin, 5 Apex Packs, and 18 Season One specific trackers.

“Season 1 is about keeping it focused and allowing players to earn a lot of rewards at a great value…We’ll begin adding more and more innovations each season, as we evolve the Battle Pass.”

At the end of the letter, Horn also said to reach out on Twitter or Reddit with future improvements the players feel the game could use.