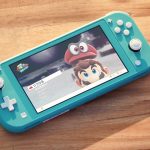 Nintendo released a console in 2017 called the Nintendo Switch. It was a hybrid system that was portable and also could be projected to a tv. This was able to be done with a device called the dock that was included with the Switch. For the past few months, there have been rumors that a mini version of the Nintendo Switch called the Switch Lite. We initially noticed this as reported by Cnet.com.

Nintendo Switch Lite is releasing with three colors yellow, grey and turquoise. All colors look amazing with the new design and will have a directional pad on the left side.  Since the price is less expensive, some features are not present in the Switch Lite. As a result, the IR motion camera and the HD rumble features are removed since the Lite will not be using it for TV projection.

The Switch Lite release date is set for September 20th, 2019 with a price tag of $200.  Being less expensive, it is an easy option if you only want to play it on the go. I think this is an amazing move on Nintendo’s part and I’m sure this just made them win the holiday of this year.

Would you consider buying a new switch for just for taking it out on the go and leave the other Nintendo Switch in the Dock?

See More: Enjoy the Switch? Check out our The Legend Of Zelda First Look At E3