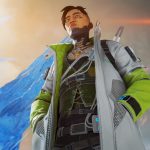 You are reading
Crypto and World’s Edge: The Rundown

You might notice some new things when you drop into your next Apex Legends match. First, you’ll notice Crypto, the long-awaited character, is finally available, then you’ll notice, that you’re not in Kansas–er, King’s Canyon–anymore. Where a mostly arid, deserted gorge laid is now a biome-filled area with volcanoes, cities, and a train. Welcome to the World’s Edge, and welcome to Apex Legends’ Season Three, Meltdown. You can watch the trailer below:

Meltdown is more than just a new season of Apex Legends: it’s a leap forward that needs to make up for past errors. Season Three of the Battle Royale shooter doesn’t just bring a new character and gun, but a completely new map, the World’s Edge. Respawn shows off both their environmental design and artistic talents with this update. There’s a lot of new to look at, so let’s start with the most anticipated: Crypto.

Crypto is Meltdown’s first of three biggest additions. He is finally in Apex Legends after months of rumors, leaks, and in-game hints. His nickname is “Surveillance Expert” because of his flying drone. His tactical ability launches the drone, which can fly through the air within a limited range of Crypto before losing connection. When the drone spots something (ie a gun, supply bin, or even enemy players), it highlights that item for the whole squad to see. His ultimate, Drone EMP, can only be used from the drone, and does 50 shield damage (so half of the possible maximum), slows players it hits, and destroys all traps. A word of caution: the EMP can hurt Crypto to, so be careful.

Despite Crypto’s longer range, he not necessarily a better Bloodhound. When he uses his drone, he doesn’t move at all, so don’t use it when you’re standing out in the open. Conversely, Bloodhound’s abilities are designed to let him lead the charge. If you know how to balance the difference between the two, both will work wonders for you. Much like World’s Edge, Crypto brings a new, vertical slant to the reconnaissance gameplay.

World’s Edge is a Sniper’s Paradise

You can see for miles in World’s Edge. According to PC Gamer’s preview, Respawn designed the map for long-range firefights, and they clearly succeeded. Along with wide-open areas, you also have cities and industrial drills that snipers can perch on and pick off players. Respawn added a new weapon and loot vehicle, the Charge Rifle and supply train respectively, to augment the long-range gameplay. The Charge Rifle starts with a warning beam that deals damage before a final blast doles out tons of damage. Finally, the supply train replaces the supply ship. Train tracks cover the entire map, and

Aesthetically speaking, World’s Edge is gorgeous. There is a multitude of different environments that range from the aforementioned cities and drills to lava surrounded bases, a frozen epicenter, and a geyser filled cove. That’s just the places you can go to on the map. A smoldering, ominous, volcanic eruption sits far south of the map. While this is just speculation, that volcano could affect a map change for a future competitive season.

This is Apex’s Biggest Season so Far

Respawn is taking the next big step in Apex Legends. They didn’t update the map again, they gave us an entirely new one. Crypto gives less aggressive players a more comfortable recon option. Apex came out swinging with Season Three, and solidified their place as one of 2019’s top games.