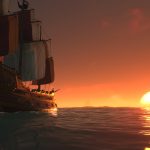 You are reading
Sea of Thieves Lives on Two Years Later

Peer pressure is great for capitalism. Your friend sees Sea of Thieves, developed by Microsoft Games Studios property, Rare Ltd, knows they want it immediately and convinces everyone else to buy it (before Game Pass). I originally wasn’t, but when you win a free gift card at work, you have money to spend. Two years later, I’m glad I bought it and play it so much. Rare has continually earned this investment, and the time I’ve spent with my crew has been more than worth it.

Sea of Thieves launched with few gameplay options. The original game had three factions: Gold Hoarders, Order of Souls, and Merchants’ Alliance. Each faction had missions, the world had skeleton forts to raid, and other ships only had other players. You could fight the other ships, but forts needed a skull-shaped cloud above to fight. Of all these threats, the literal biggest was the Kraken, which would attack your ship in the middle of the sea. There was an endgame faction, the Athena’s Fortune, for hitting max levels in all main factions, which made you a Pirate Legend. All of this is still in the game, but that wasn’t enough at launch. Further, you couldn’t set up private ships, of which there were only two types: the sloop, and the galleon. At first, Sea of Thieves did not have enough content to keep players, especially those without regular crewmates. 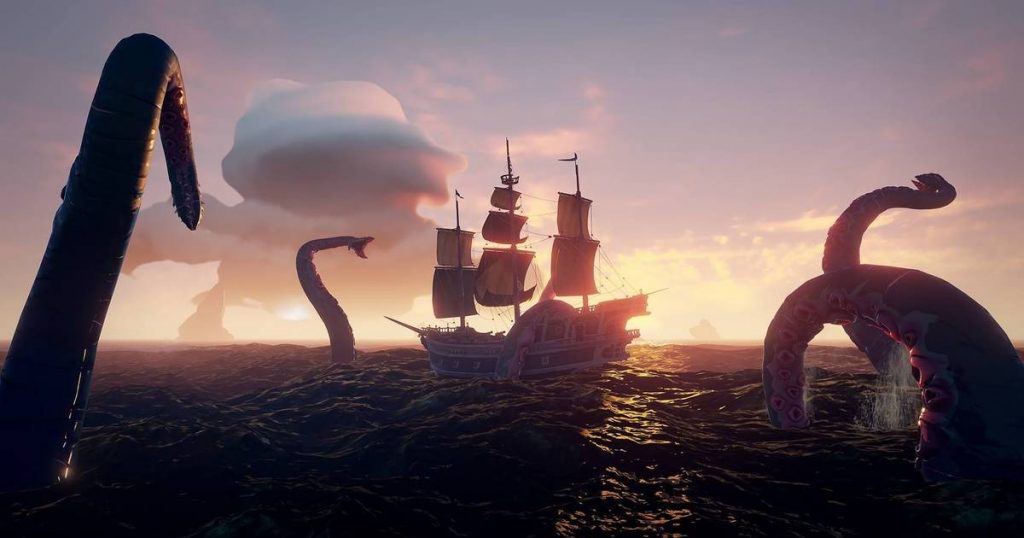 I stuck with this game because I had a dependable crew. My crew originally rotated about six different players throughout the early days. We had different habits, like ringing the bell dependent on what we saw from the crow’s nest. My personal rule was playing Spirit in the Sky by Norman Greenbaum whenever I saw an active fort. Fast forward about a year, and most of us still play the game. Three of us hit Pirate Legends, and we still play, especially when there are new updates.

Rare’s long-term investment has kept Sea of Thieves afloat. At first, Rare focused on gameplay specific updates. Year One’s updates introduced new non-player threats like the Megalodon (a giant shark), Skeleton Ships, and volcanic islands in a new region called the Devil’s Roar. Forsaken Shores, a late 2018 update, also introduced new ship types, the three-man Brigantine (the Brig), and the rowboats scattered through the sea. Most of these updates expanded gameplay options and built towards a bigger experience than the original launch. Once the anniversary came, it felt like a brand new game.

Sea of Thieves celebrated its first birthday with a massive update. It brought in fishing, a competitive multiplayer mode called “The Arena,” and a story mode called “Tall Tales.” Fishing is the most relaxing thing in Sea of Thieves. You go find bait, put it on your rod, and cast your line. Reeling in your catches can get tricky, but it’s rewarding. “The Arena,” much like adventuring, is best with an established crew. It’s a race to see who gets the most points through digging up and turning in chests, shooting other ships, and killing opposing pirates. “Tall Tales” are lengthy story missions that build towards a phenomenal haul. Each one has a self-contained story that also builds toward a greater story and builds out Sea of Thieves lore.

After the first anniversary, Rare pivoted to bigger monthly updates. These have varied in size and scope, but they’ve always been consistent. Each month promises a new addition to get players back into the game. As a matter of fact, IGN re-reviewed Sea of Thieves, something they only do when a game has undergone a serious transformation. If that doesn’t speak to Rare’s work on the game, I don’t know what will. Regardless of my gaming playlist, I always check in on Sea of Thieves monthly to see what’s new in the game and in Microsoft Game Studios.

Sea of Thieves is the Xbox Exclusive Version of Fortnite

Special ship cosmetics are mostly promotional now. They’re free and linked with other promotions and events. To be fair, Rare does make world-related ship cosmetics. What’s more, this started in Year One with an anniversary Banjo-Kazooie figurehead, an early Rare game. They did entire ship cosmetics for other past games like Viva Pinata! and Conker’s Bad Fur Day. Last year, however, these expanded to more Microsoft properties, going from Halo and Gears of War to a new Ori inspired set. Compare this to Fortnite, who releases cosmetics based on movies (see both Avengers-related events), sports (NFL in particular), and has hosted literal concerts in-game. So far, Sea of Thieves hasn’t gone too far with this, like showing important parts of an unrelated story in-game. So long as they toe that line, they’re marketing other games well.

Now These Seas Let Me Reminisce

After two years of frequently playing, my crew has had a slew of memories. A lot were really good, like when one of us got hit midair by a cannonball, or when we dressed as The A-Team. Others, not as good. We’ve lost some major hauls, wasted nights chasing other ships, and have suffered defeat. Sometimes, dumb luck has covered my ass when I screwed my crew.

My personal favorite night involved looting a fort as an opposing ship attacked, being the sole survivor of both crews and stranded on a dingy with all the loot. As my crew returned with the galleon, the opposing galleon sailed right up behind me as I tried rowing towards my crew. Apparently, it looked like the ship equivalent of the Finding Nemo poster where the Great White Shark is grinning behind Marlin & Dory. I was absolutely terrified and had to get the sloop to my ship while it fought off the other ship. Guess what? We won; we sunk that ship, rushed to the nearest outpost, and turned in the most well-earned haul we’ve ever had.

There’s something about Sea of Thieves that’s different from the other games I play with my friends. We haven’t collectively played and been excited about future updates for a game like Sea of Thieves. This has been my only consistent friend group in my post-collegiate life, and this game has been a huge discussion topic between us since its release. Other games get regular updates, but they don’t seem to rely on the teamwork Sea of Thieves does. As of early January, 10 million pirates have sailed on the sea. While I know everyone has their different tastes, I hope they had experience as enjoyable as mine.