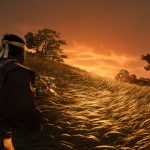 You are reading
Ghost of Tsushima Patch 1.05 Adds “Lethal” Difficulty

PlayStation has stealth-dropped an update to their successful new PS4 IP Ghost of Tsushima. The update adds a new difficulty, among other additions.

Patch 1.05 for Ghost of Tsushima was given more details over on Sucker Punch’s website. Once downloaded and installed, players will be able to access “Lethal” mode, a step above the game’s hard difficulty. In it, enemy weapons as well as Jin’s katana deal significantly more damage. enemies are also more aggressive in combat and will detect you faster. At the same time, dodge and parry windows are even tighter. Whether you choose to go ghost or the way of the samurai, it seems your skills will be fully tested.

Sucker Punch has also added more accessibility options, such as text configuration. Patch 1.05 will allow you to increase the text size of subtitles, mission objectives, and interact prompts by 150%. You can also turn off speaker names and choose subtitle colors to be yellow, blue, red, or green.

The update brings in a more relaxed style of play with a “Lower Intensity Combat” option. This mode is “meant to maintain the heart and feel of Ghost of Tsushima combat while relaxing several timing-specific elements.” At its core, combat will give you more time to react and stealth sections are more forgiving. Most unblockable attacks are now blockable, but some will still need to be dodged. Heavy attacks will interrupt Brute attacks as a way to stop their combo. Enemies will also not charge at you while healing.

Lastly, Patch 1.05 includes some bug fixes to make exploring the island Tsushima a more polished venture. The update is now live to download on PS4.