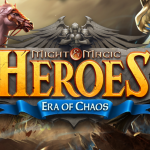 You are reading
Ubisoft Forward: Might & Magic Era of Chaos Trailer

Players had some great gaming news come out during today’s Ubisoft Forward event. The Might & Magic Era of Chaos trailer was more of a thank you to the players who have been spending the last seven months in the game.

The game’s backstory is that players will join Queen Catherine Ironfist on a quest to restore the Kingdom of Erathia that is ravaged by war. This game is free to play on both Android and iOS devices. You can join in on real-time PVP battles alone or in a clan. If you fancy playing alone, don’t worry, this isn’t just a multiplayer experience. Might & Magic Era of Chaos also has a huge single-player campaign to enjoy.

Might & Magic Era of Chaos might have missed many people’s radars so the trailer was a great reminder. Now we all can jump into this mobile title. Some of the other news involved games like Watch Dogs Legion, Hyper Scape, Brawlhalla, Far Cry 6, and Assasin’s Creed Valhalla. This was the first of many Ubisoft Forward events that’ll take place during the summer.

Did you enjoy seeing this new event? Let us know how you feel in the comment section below.

Stick around and be sure to bookmark lordsofgaming.net. We strive to provide readers with all the latest and greatest gaming news, reviews, and more that you need in your life.