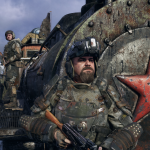 You are reading
4A Games Has Been Acquired By Embracer Group

4A Games has been on an incredible trajectory this generation. With the release of Metro Exodus in early 2019, the studio found great success with the game. The Metro series reached new heights in terms of popularity and sales. There have long been rumors that many publishers had been eying 4A Games for acquisition. It appears that a company has finally decided to make the offer 4A couldn’t refuse.

The Future of 4A Games

In an official blog post released earlier today.  Embracer Group, who is the parent company of THQ Nordic made a big announcement. They had officially acquired 4A Games and added them to their ever-growing development group.  In this shocking move, Embracers owns 100% of the shares in the Ukraine studio. Embracer has laid out what the future will look like for the studio. As they join the likes of Saber Interactive, Warhorse Studios, and many more.

“Within the Embracer Group, 4A Games will operate as an independent studio under Saber Interactive. 4A Games will significantly strengthen Saber’s development capabilities in Ukraine and are currently collaborating on an entirely new project that combines the AAA production values of 4A Games, combined engine and technology know-how, and Saber’s experience on multiplayer and live operations. 4A Games has also initiated development on a brand new AAA IP that leverages its decade of experience on developing the Metro series.”

With the announcement that the studio is making a AAA multiplayer-focused game with Saber Interactive. While also working on a brand new AAA IP based around the experience the studio has gained working on the Metro franchise. Embracer Group continues to spend and invest in more and more studios as well as IP’s. It really brings up so many more questions. How many more studios are they looking to acquire? How many more IP’s will they be looking to acquire? Only time will tell. but the future looks incredibly promising for 4A Games.