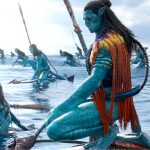 You are reading
Avatar: the Way of Water Teaser Trailer

Avatar: The Way of Water is fast approaching. Disney is delivering fans a return trip to Pandora. Specifically, dealing with the aftermath of the first film. Jake Sully (played by Sam Worthington) returns as the series protagonist. He is front and center as the trailer delivers a stunning reveal for the franchise’s next journey.

James Cameron returns as the movie director. The Way of Water was originally set for December 2020. However, filming setbacks delayed the entire sequel timeline by a few years. Yet, the world of Pandora has not lost its beauty.

The first film was groundbreaking in its cinematography. Chiefly, the aesthetics and nature of the Na’vi (natives of Pandora). This trailer shows The Way of Water seeks to take viewers to the beauty that lies beneath the waters of Pandora.

Water is a symbol of change and healing. The Hometree was ravaged during the battle against the RDA of the first film. Rebuilding a home and a family from that is no easy feat. Therefore, Jake Sully and the Na’Vi may be taking a spiritual or necessary migration. Visuals of water and new Pandoran aquatic life are plentiful in the trailer. Jake and Neytiri (played by Zoe Saldaña even have children of their own during this time.

After all, it has been ten years since the events of the first film. Unfortunately, trouble will still plague the Na’vi and their way of life. It is up to Jake and the tribe to band together in protecting what they have built. Time will tell what new threat stands in their way. Are you excited to return to Pandora? Let us know in the comments down below.