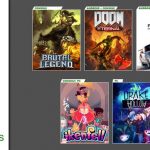 Here is a full list of the games and what platform they will be coming to during the month of October. All of these games are set to release on the service between October 1st and October 8th. Which means we could maybe even expect more games to come later in the month. Fingers crossed that some super spooky Haloween themed games will be announced later next month.

What do you think of these new additions to Xbox Game Pass? Let us know in the comments and don’t forget to check back for the latest gaming news and information.