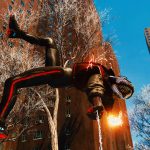 You are reading
Spider-Man: Miles Morales: 5 Tips For Getting the 100x Combo!!! Trophy

Spider-Man: Miles Morales is finally here and avid trophy hunters are on the prowl for that coveted Platinum trophy. To check off one more trophy on your completion list, here’s how to achieve the “100x Combo!!!” achievement.

Whether they are wielding auto-rifles or handguns, long-ranged enemies can become annoying combo breakers. Your best bet is to scope out an enemy base and mark which ones carry guns. Since combat feels more slow-paced at 30 FPS, it can be tricky to dodge incoming fire in a matter of milliseconds. So, take out ranged opponents first. You can also disarm them mid-fight, but that would leave you vulnerable, so be wary.

Combo in Your Gadgets

Miles has four available gadgets on him to help increase the combo multiplier. One is his decoy dummies, which can distract certain enemies from targeting you. This will create more opportunities to get some hits in. Another useful tool is the Gravity Well, which pulls in surrounding enemies and knocks them down. Follow up with a Venom Jump or Smash to stun multiple thugs and add to that combo multiplier. 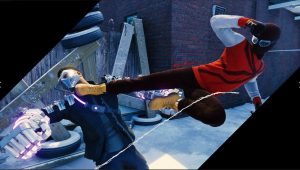 See More: How To Get THIS Secret Side Mission in Spider-Man: Miles Morales

While some superheroes dominate grounded fighting, Spider-Man’s domain is in aerial combat. In Spider-Man: Miles Morales, Miles is no different from Peter. Hold down the attack button to launch henchmen into the air and essentially make them into floating punching bags. Playing on a harder difficulty will have them take more hits, so that’s something to think about when going for the trophy.

The larger thugs were a pain in the butt in 2018’s Spider-Man, and they still are in 2020’s Miles Morales. They absolutely love to throw out quick sucker punches while you are in mid-combo. To counteract this, save Venom Punch or Venom Smash for them. Going into the Venom Punch animation grants Miles some invincibility, which will ignore the large thug’s sucker punch if it happens to sneak up on you. Venom skills also stun, giving you a few seconds to reorganize and continue your combo. 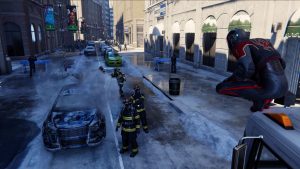 Remember To Use Your Finishers

Another quick way to escape enemies nearly hitting you is to use your finisher special. Save them for when you need them in tight spots, especially when you get closer to 100 hits.

See More: How To “Ultimate” Every Challenge in Spider-Man: Miles Morales

Bonus Tip: The Earlier, the Better

The further you progress in the main campaign, the harder the groups of enemies will be. Most notably, the Tinkerer’s henchmen and women. In that sense, try to spot a mission in the beginning hours of the game that has a large group of thugs. The side mission called “My Car’s Gone!” is perfect to tackle this trophy early on, which you can see below. By no means is the video a perfect example, but I did manage to pull off a 100-hit combo with little to no gadgets on Spectacular difficulty.