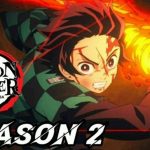 Demon Slayer is a Shonen Jump anime adaptation of its manga source material: Kimetsu No Yaiba. The anime was released for western audiences in 2019. The anime quickly became a fan favorite for audiences everywhere. The story follows a boy named Tanjiro Kamado, on his quest to turn his demon sister back into a human. Season one ended with Tanjiro and his companions embarking on another adventure after harrowingly surviving their last encounter with demons. Demon Slayer Season two will seemingly raise the stakes as today, Shonen Jump released our first hints with the new trailer.

The season trailer shows the story’s focus will be on the Entertainment District. If the anime follows the manga closely, season 2 will have even flashier demon fights for fans to enjoy coming sometime this year. In 2019, Kimetsu No Yaiba outsold One Piece in terms of manga sales by 1.9 million volumes. Previously, One Piece had held the dominant ranking since 2008. Demon slayer seems to be on the rise. With a box office breaking movie in 2020, and a new video game coming soon, 2021 is shaping up to favor the demon slayer corps.

Read More: Attack on Titan Manga Will End in April 2021

A Successor to Storm

The news did not end with season two. A live stream was also held in Japan to celebrate the two year anniversary of Demon Slayer the anime. The live stream debuted the first gameplay reveal for Demon Slayer: Kimetsu No Yaiba – Hinokami Keppuutan. The gameplay showcases a two versus two arena fighting game style with a hud that is very reminiscent of the Naruto Shippuden: Ultimate Ninja Storm Series.

This is not surprising, Cyberconnect 2 is the developer for both; however, this time the game will be published by Aniplex. The Storm series is regarded as a golden standard among anime video game fans. This new game gives high expectations to deliver a product that is more than average for the anime community. There is not an official release date announced, although Aniplex will most likely release more news as the year progresses. Demon Slayer: Kimetsu No Yaiba – Hinokami Keppuutan will release on Xbox Series X|S, PlayStation 5, PC, as well as last-gen consoles Xbox One and PlayStation 4.