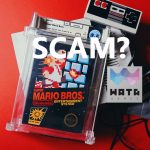 You are reading
WATA Games, Gaming’s Greatest Scam Or Victim of Misinformation?

On August 23rd, Youtuber Karl Jobst posted a video going over what he believed to be a campaign of market manipulation tied to retro video games. The video has since gone viral across retro gaming communities creating an uncomfortable situation among collectors. The price of retro games has skyrocketed over the past four years. With that, millions of collectors have turned to WATA Games for the grading and certification of these now valuable collectibles.

WATA Games was founded in 2017, they began grading games sometime in early 2018. Back then if you wanted to get a game graded you had two choices, WATA and VGA. If you did some investigating between the two, you might come across debates over their scoring systems. Or maybe even the type of case they use. Otherwise, feedback between the two is about the same.

Seemingly overnight, sometime after WATA began grading they became the go-to for grading and certifications of retro games. A big source of this was the prestige given to WATA by being recognized by Heritage Auctions. As a seemingly household name, Heritage Auctions is a go-to site for bidding on six-figure comics, coins, and other collectibles. It has now done the same for retro video games.

Jobst goes on to back this claim up with a connection between WATA Games and Heritage Auctions. This can be proven with a quick visit to the WayBackWhen Machine where you can see Jim Halperin is on the WATA advisory board in April of 2018. Although is Heritage Auctions partnering with WATA to sell their games exclusively market manipulation? Collusion? Or just the free market at work? I am sure that will all be sorted out in court. Although it is not the optic you want if you are Heritage Auctions, they should be more open.

“… the easiest way to create a bubble is to create headline-worthy events that can discriminate through the media. In this case, it was the purchase of a Super Mario Bros. cart for $100,000 in February of 2019. Before this sale, the previous most expensive game sold went for $30,000. So this new sale was a pretty big deal…It was purchased by Jim Halperin (WATA advisor, HA founder) Rich Lecce (WATA advisor), and Zac Gieg (speculative collector, new to games).”

This is somehow a worse optic for Jim Halperin. He even had Heritage Auctions post a write-up about the sale with a press release stating he may list the game for sale again. Including that he believes the game will sell for $1,000,000 one day. It sure is confusing as to why the chairman of the auction house is buying the world’s most expensive game. I do not believe that this is illegal but, a coordinated manipulation of the market, by continuing to put the game on sale can not be right.

Right after this moment in Karl’s video is where he loses me. At the 13:28 mark of his video, he claims “they” as in Jim Halperin, Zac Gieg and Deniz Kahn (WATA President) brought the same exact Mario Bros. game onto the Pawn Stars TV show as an opportunity to market the game. Also that Deniz makes claims inflating the value of the game.

“Several weeks ago I was investigating the relationship between WATA Games and Pawn Stars given that the first appearance of WATA on that show was obvious collusion between the grading company, the auction house, and the show. In my research, I was investigating a copy of Mike Tyson’s Punch-Out! that Deniz Khan valued at $80,000. Through a Google search, I found something interesting. It was a purchase agreement of the exact same cart. The owner of the cart Brian had sold the card for the same exact amount Deniz (Khan) had valued it at.”

Again Jobst has some lazy reporting here. If you spend five minutes and twenty-eight seconds you can watch the entire segment on the Pawn Stars YouTube channel. You will notice that yes this time Khan does value the game this time. Yet at the chance of valuing the game at $100,000 he values the game below the seller’s asking price, claiming it would sell between “$60,000 to $75,000.” This debunks the entire myth that Khan is on TV to inflate the value of the game.

The episode aired on March 22, 2021. It would be hard to tell when the episode was filmed exactly, so for the sake of argument let’s look at sales of Mike Tyson’s PunchOut! from around that time.

You could make a case that on April 4th, just weeks after the Pawn Stars episode, there was coordinated listening of Mike Tyson’s Punch-Out! A listing that sold for a whopping $102,000. It should be noted that this copy is graded two points higher than the one that appeared on Pawn Stars. Also, note there is no indication that Khan, Halperin, or anyone else within WATA was involved with this sale, outside of its grading. In addition to the fact that Khan severely undervalued the copy, he assessed on Pawn Stars. Especially, given that two copies with lower grades sold for more after the show aired.

Mark Haspel is one of the founding members of CGC, “the” comic book grading company. If you have ever seen a graded comic, it was most likely done by CGC. Sometime after he left in 2011 he joined Deniz in forming WATA. In the second half of his video, Jobst accuses WATA Chief Advisor Mark Haspel of buying games at conventions for himself. Investing in sealed NES games, specifically games that would later inflate in value.

“One collector stated, Mark Haspel was buying sealed 6-packs from a good friend of mine, the year before WATA started grading games. Pat The NES Punk also noticed Haspel collecting games at conventions.”

I have two issues with Jobst’s claims against Mark Haspel. First, it is entirely irrelevant what Mark Haspel was doing before WATA was founded. Anyone who could predict what would happen to sealed NES games five or six years ago probably deserves the money. Jobst trying to support his claims by pointing out a game collector was collecting games, prior to working in-game collection, as if that is some sort of crime.

Secondly, I personally met the WATA team including Mark Haspel at New York Comic Con in 2019. One of the things that propelled me to write this article is, that yes on the final day of NYCC, I did see Mark Haspel holding games on the convention floor. Equally important, I asked him if he was selling the games he had. These were games he was boxing up himself and taking back by hand to Colorado where they would be graded. Yes back in 2019 WATA was taking submissions by hand at conventions. This is most likely what people saw in 2018 and 2019.

Author, Lawyer, and Journalist, Seth Abramson took to Twitter to speak about what he discovered when investigating allegations against WATA Games. His biggest complaint against WATA is their lack of a Population or “Pop Report.” This is a release (not always for free) that grading companies often release annually to report their production counts. For example, if 25,000 copies of Mario 64 were graded in 2020, or 25 copies of Gex were graded.

This information is extremely critical in assessing the market. Abramson has done an immaculate job detailing this here. In addition to creating his own population report by counting graded games for sale on public marketplaces. Although he does point out that no other company in game grading releases a Population Report. To me, releasing a Pop Report should happen but to call it industry standard is inaccurate.

He follows up by pointing out WATA had an “API leak.”  It should be noted that we have not seen any evidence of that leak, nor would WATA confirm that the leak happened. Yet Abramson has determined the number of sellers had been able to receive a Pop Report due to its existence within the WATA computer systems. Giving these sellers a tremendous advantage because, as it turns out, some of the highest-selling NES games are of course the most popular when it comes to grading. Both Super Mario Bros. 3 and Super Mario Bros. are in the top five. Along with Zelda II: The Adventure of Link. Another high-selling game.

Is WATA A Bad Actor?

Unless there is some grand conspiracy between WATA Games and Heritage Auctions, it looks like WATA is being singled out here. I would have liked to see Karl Jobst flush out his story a little more. As there are a few holes and inconsistencies that Jobst tries to illustrate, especially when it comes to WATA.

As for Heritage Auctions, the story behind Jim Halperin makes me feel uncomfortable as a collector. They should open their doors to other gaming grading companies to remove the conflict of interest. Halperin, as well as the leadership in WATA, should be banned from bidding on WATA games in an auction. If Heritage Auctions has nothing to hide, they should publish the bidding logs on these games they are accused of continually recirculating.

In an effort to tell the entire story, we asked WATA games the following questions:

Response from Wata Games to LOGNET:

“Wata Games is the trusted leader in collectible video game grading and we’re honored to play a key role in this booming industry that we are incredibly passionate about. We’re humbled by the support of our thousands of customers who trust us to provide accurate and transparent grading. The claims in this video are completely baseless and defamatory and it is unfortunate that Mr. Jobst did not contact us to give us the opportunity to correct him.”

“Heritage Auctions wishes it had been given the opportunity to respond before the video’s publication, because there are numerous misstatements of fact and inaccurate conclusions contained within the piece, Heritage strongly refutes any allegation that it or its officers are involved in shill bidding, “market manipulation” or any similarly illegal or unethical practices. Heritage prides itself on our transparency and being a place built by and for collectors. With this in mind, we welcome the opportunity to discuss the video-game marketplace further, and would invite Mr. Jobst to our world headquarters in Dallas to tour our operations and speak further with leadership.”