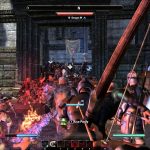 You are reading
ESO: How to Survive in Cyrodiil PVP at a Low Level

When beginning an MMO-style game there are many things that can be intimidating.  There are the dungeons, learning game mechanics, as well as PVP. Elder Scrolls Online (ESO) has amazing stories and lore behind the game. In addition to that, one of the most talked-about features is the game’s player vs. player (PVP) system. ESO has multiple ways to enjoy its PVP offering. There are Duels, Battlegrounds, and the campaign-based Cyrodiil Alliance Warfare. I will provide some insight on how to survive while participating in Cyrodiil at a low level.

When you make the decision to start PVP in Cyrodiil, you have to at least be level 10. At this point, you must assign yourself a Home or a Guest Campaign in the Alliance War interface. Your Home Campaign will be where you can earn a place on the leaderboards among other rewards. 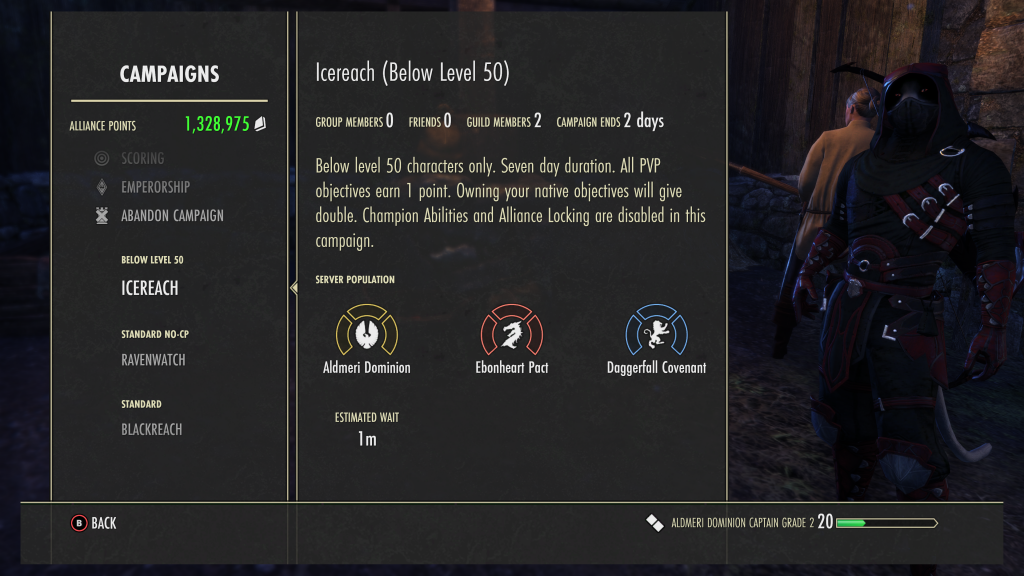 There are four different month-long campaigns you can choose from. You decide which you like best for your home campaign. Some have requirements like the example above and can provide some different challenges and perks. Gray Host is the most commonly played PVP campaign in the game. It is also an alliance-locked ruleset. In other words, joining the Gray Host campaign locks players into that character’s faction for the entire duration of the campaign. The available factions are Aldmeri Dominion, Ebonheart Pact, and Daggerfall Covenant.

The faction in ESO you get put in is usually based on the race you select. However, there is a pack you can purchase that allows you to be any race in any faction. The next campaign is Blackreach. This campaign is similar to alliance-locked but without a faction lock ruleset. Meaning players can swap factions without waiting for the campaign to end. Another commonly played campaign is the Standard No-Champion Points (CP) Ravenwatch. This one is similar to Standard, where players can join with characters from different factions. Yet, the Standard No-CP campaign disables all Champion Points. To clarify, players can earn CP points once they hit level cap of 50. CP points can be allocated in three new skill trees to help further strengthen your character. Lastly, there is the Under 50 Icereach campaign. This campaign follows all the rules of Standard No-CP, but characters must be under level 50 to be able to join.

Once you decided which campaign is best for you, it’s time to queue for Cyrodiil.  When I decided to join PVP, I was level 19 and didn’t have any ESO Champion Points. This was because I did not reach level 50 yet. There is a chance you could have some experience buff scrolls on your character so always make sure you have one active. They will help you quickly level up as you kill people, capture keeps or resources, and turn in quests for that area. Make sure to stack up on quests from quest boards and quest-givers in order to gain a good amount of XP.

At this point, I am assuming you know how to level up and distribute your skill points how you want. Next, you should try to find some running mates. Again, I’m assuming you’re a low-level player, so finding a group would be a huge advantage. Look at the zone chat and either you can type LFG which will indicate to others you are interested in a group. Or another option is to invite others players to join your group. After you get a few and get acquainted, decide on a strategy for the group. 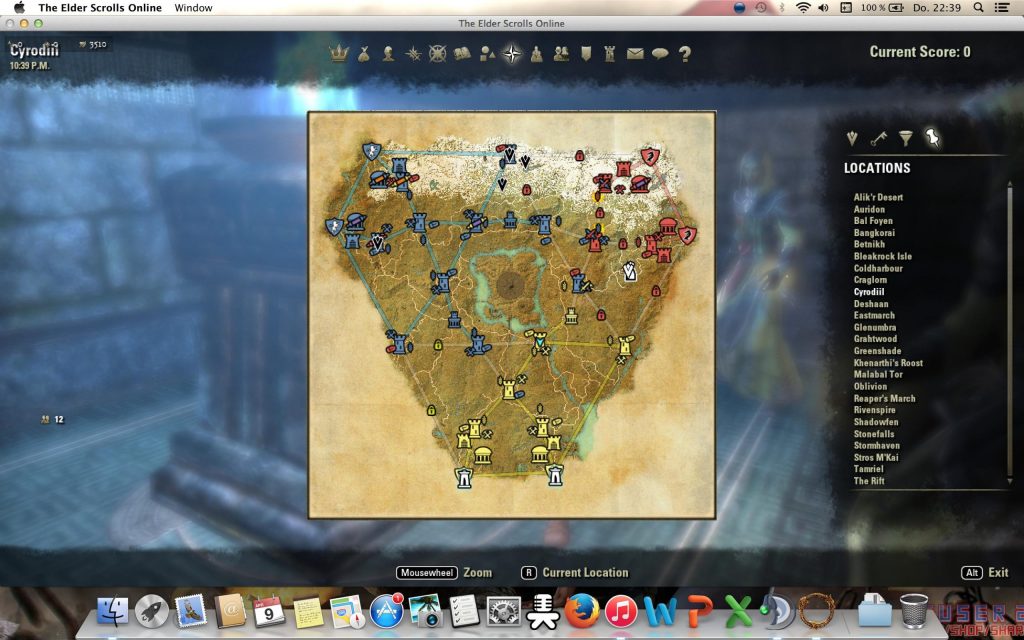 Strategize with Your Group

In ESO, there are three different factions in Cyrodiil. These factions that all attempting to capture and control keeps, resources, and Elder Scrolls. Capturing these items and places of interest will earn you points for your faction. The more and longer you have them will of course gain you more points.  At the end of the campaign, factions get rewards based on the place they come in. If you get in a group with higher-level people which tend to be more experienced soak up all the knowledge they provide. Luckily, I was invited to a big group of high-level players. One of their strategies was to capture the 6 keeps around the middle of the map to get Emperor.

When a faction has Emperor, the 6 keeps in middle are controlled by one faction. And the player with the most Alliance Points (AP) becomes the Emperor. This provides the Emperorship Alliance Bonus which gives a buff to the people in that faction. The longer you hold resources and keeps, the harder it is for them to be taken from your faction. But you do have to ability to help defend those places with siege weapons and your great combat skills. You can purchase siege weapons and support items from the vendor in your keeps with Alliance Points.

It’s ok to listen to multiple people’s advice when it comes to your character and what items you should get. However, always remember to ultimately play your character the way you want. Don’t let other ESO players bully you into spending all your AP in Cyrodiil for different siege and support items. Because you can use your hard-earned AP to purchase other things.  Do be respectful though and make sure to get some ballistas, trebuchets, flame pots, and wall/door repair kits to help out your faction. Remember, we are all on the same team and trying to win the campaign.

Doing a Run for The Elder Scrolls

One of the most important things in ESO lore is literally The Elder Scrolls. Each faction has an offensive and defensive scroll that they are supposed to protect from enemy factions. They are stored in scroll temples near the border gates in Cyrodiil. Once a faction takes control of them, they can keep them in any keep in their control. These scrolls provide bonuses to people in the alliance that control them. During my early time playing PVP, my group decided to do a scroll run.

A scroll run is just going to an enemy keep and attacking it until we can get inside and steal their Elder Scroll. My group, being the cool people that they were, decided to have me run my first scroll run. I was only level 24 at the time with no CP.  We had a decent amount of the map under our faction’s control. So they decided to go up to one of Ebonheart Pacts’ (EP) scroll temples and take their Elder Scroll. When it came time I took the scroll and was off to the races. When carrying a scroll, you are limited in what you can do. One of the big things is you can’t ride your mount, which is why it’s called a scroll run.

With my group and other faction allies following around me, we ran across the map to place it in a keep far away from the EP faction. This would make it easier for us to defend and harder for the EP to take it back. Even with this, you will always have to watch your back as the other factions are always looking for an opening to strike and take it from you or take your own scrolls. 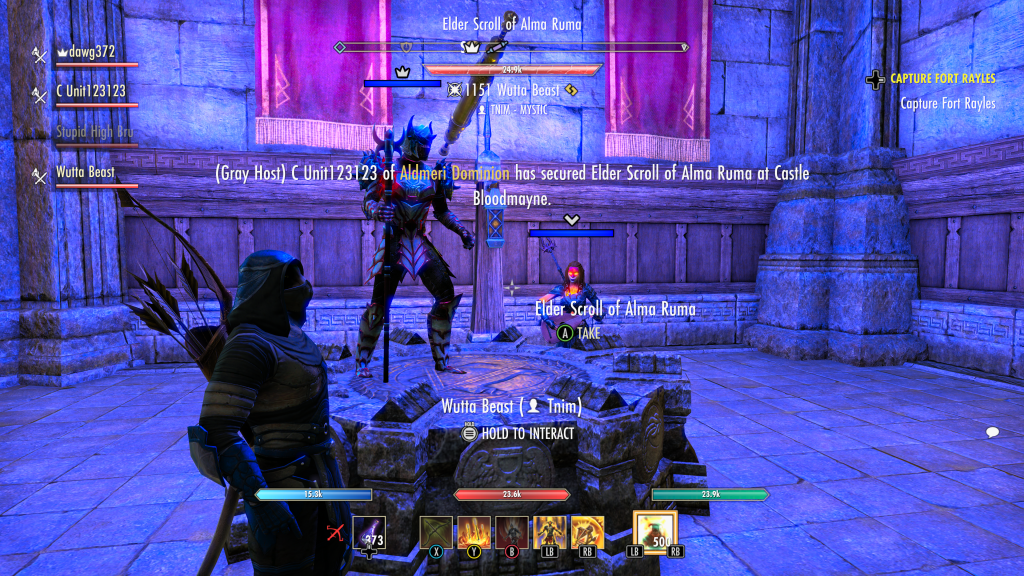 The ESO mega weapon Volendrung spawns 4-5 times per day in each campaign. The person wielding the hammer is able to deal a massive amount of damage to enemies, their keeps, and their outposts making them quicker and easier to capture. When it spawns, an on-screen notification will appear stating “Volendrung seeks a wielder”. If 10 minutes go by and no one has retrieved the hammer, or someone retrieved the hammer before then, an on-screen notification will appear stating “Volendrung is revealed”. The hammer’s icon will then show up on the map and will remain for the duration that it is active. The hammer may change hands several times, and its map icon will change color to correspond to the faction that controls it. If the hammer icon is white, this means there is no wielder at the moment. After about 30 minutes, or after it changes hands about 4-5 times, Volendrung will despawn once dropped. This is indicated with a message stating “Volendrung returns to Oblivion”.

If an enemy drops the hammer and it isn’t picked up within 5 minutes, it will respawn back where it was originally retrieved from if it was not yet time for it to despawn. The hammer is ideal for many strategies revolving around capturing the keeps and pushing enemies back. It is also used for Emperor pushes as well which can be important. Unfortunately, with any game, you have the trolls that will take the hammer and do nothing with it. Instead, they will farm people to chase the hammer wielder and do nothing. Since we are lower level without the guidance of the group or more experienced people, we should leave the hammer to others and just help them fight and defend them.

ESO PVP is a vast landscape consisting of many gameplay mechanics. Although this wasn’t a complete beginner’s guide, it should help with the basics of Cyrodiil PVP. Always make sure to do the quests so you can level up while playing and make it to level 50 and earn Champion Points.  Always keep your food and drink buffs active and don’t forget to have the experience scrolls on to help you level up faster. There are rude people out there but don’t let them deter you from having fun.

I managed to meet many great people when my character was lower level. Many of whom I still play with all the time. So definitely remember there are good and helpful people in PVP. I joined at level 19 with no CP. Now, I am level 50 with almost 400 CP and have barely left Cyrodiil.  This should provide some small insight into what you will experience and help you a bit. You can also try ESO on Game Pass and decide if you will want to buy any expansions or in-game items.  Hope this helps you and always remember to try to enjoy your time in Cyrodiil PVP.