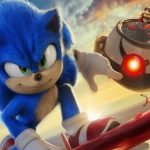 You are reading
Take a look at Sonic The Hedgehog 2

Fans looking to see a second Sonic the Hedgehog movie won’t have to wait that much longer. Here is the first trailer that was released tonight during the Game Awards for Sonic The Hedgehog 2.

Dr. Robotnick has returned and he’s not alone. Not only does he have a green emerald he also has new allies in the form of Knuckles. Don’t worry though, Sonic has a new friend as well. Tails will be making his appearance known in this movie. Take a look at the first trailer for Sonic The Hedgehog 2.

Fans won’t have to wait that long to see this film. Look for Sonic The Hedgehog 2 to be released in theaters on April 8th, 2022. As you can see from the trailer fans don’t have to complain that this movie won’t look like the game. In fact, this movie looks much better than the previous movie. It will be exciting to see how this film plays out.

How did you feel about this trailer? Are you excited to see Knuckles and Sonic fight on the big screen? Let us know in the comment section below.

Have you missed some of the game reveals during tonight’s Game Awards? Take a look at a couple of these articles to get in the game.