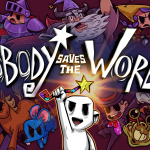 You are reading
Nobody Saves The World Review – Indie RPG Hit

When a game is referred to as being “sticky” it is a term used to describe how engaged the player is. Do you keep coming back to that game? Does it stick with you? In 2013, when I played Guacamelee! from DrinkBox studios, I saw something there but the game just did not stick with me. After an hour or so I moved on to something else. Fast forward nine years later and with Nobody Saves the World, DrinkBox has me stuck.

Nobody Saves the World is a top-down action-adventure RPG with a hand-drawn art style and lots of humor. Right out of the gate, you play as Nobody, a pale white figure with almost no characteristics. Nobody acts as the base player, from there you transform into any one of 17 characters. A vastly different set of playable characters from the likes of a Mouse, Zombie, Knight, Ghost, Magician, and even a Horse.

Nobody Saves the World has a level design that is part The Legend of Zelda: Link’s Awakening and part Super Mario 64. There is a large open world, where you will revisit old areas with new powers. Sprinkled around the map are dungeons that will become unlocked when you collect enough stars. Stars can be gained by leveling up characters, or through completing side quests.

The open-world map is comprehensive and just as charming as the characters. There is a desolate candy land area as well as a crashed alien spacecraft. These are just samples of the 15 or so different town squares within the game. The variety keeps things fresh on a visual level. Each town square has a moderate amount of content, including a fast travel pod. Moving back and forth between areas never feels like a chore.

The narrative moving you along in Nobody Saves the World is to defeat the Calamity that has taken over the map. Along with discovering the origin story of our main protagonist, Nobody. The fun characters and text dialog bring the narrative to life, even though there is no voice-over dialog. I did find myself to be underwhelmed by the antagonist. Yet every single character you encounter has something funny to say. 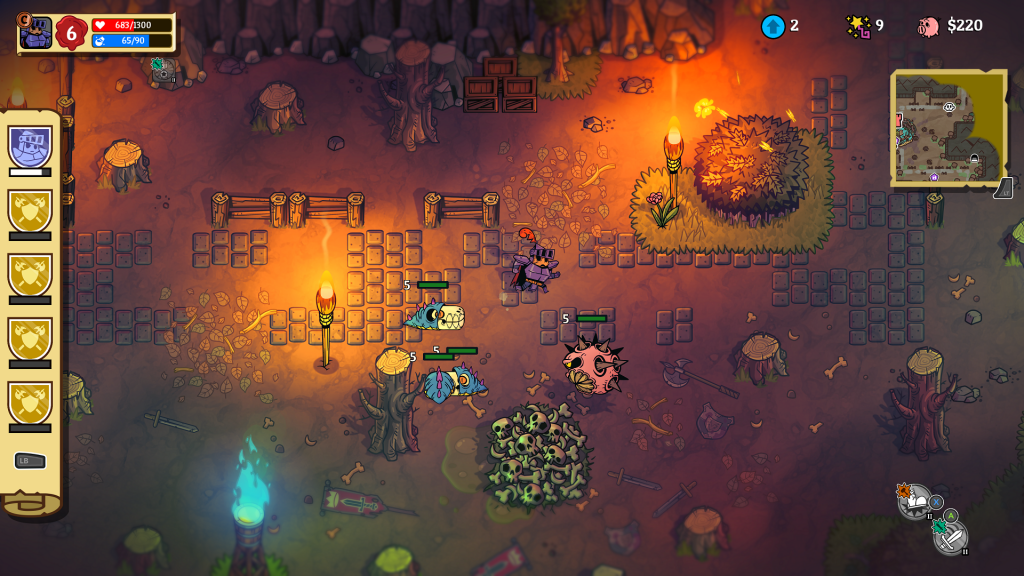 As you progress through, these characters and their abilities unlock. From there you can mix and match up to four abilities for each character. For instance, the Magician can summon rabbits out of his hat, that ability can then be given to the Mouse as one of their four attacks. With that, mixing and matching different attacks and styles will become a necessity as waves of enemies fill the screen with various vulnerabilities.

I found myself to be constantly strategizing as I moved through the dungeons in the second half of the game. As some enemies, you can not damage at all until they have been hit by a certain ability type. Overall this gives Nobody Saves the World a deeper gameplay system that just makes it feel like you are getting more for your money.

At its core, Nobody Saves the World is an RPG. By completing quests you will earn XP, level up, and then have the power to progress forward. DrinkBox has nailed a progression system that feels rewarding and unique. While you will not directly gain XP from defeating the Calamity, XP is gained from character objectives. For instance, kick 100 enemies with the Horse or by biting 50 enemies with the Mouse. The progression loop is beautifully woven into the combat mechanics in a way that will lead you off the critical path to complete every side quest.

When you encounter side quests you will be greeted with a gratifying mini-game or an amusing bit of narrative. With the Horse you can unlock the Gallop ability, then use that to race a Witch. A Knight whose head has been turned into a pumpkin will send you out to find his cure. I found the main story and the side quests to be equally entertaining and rewarding. Although the game would benefit from removing one or two of the dungeons. It is hard to complain about too much content in a game. Yet, there is something to be said about editing and removing bloat. 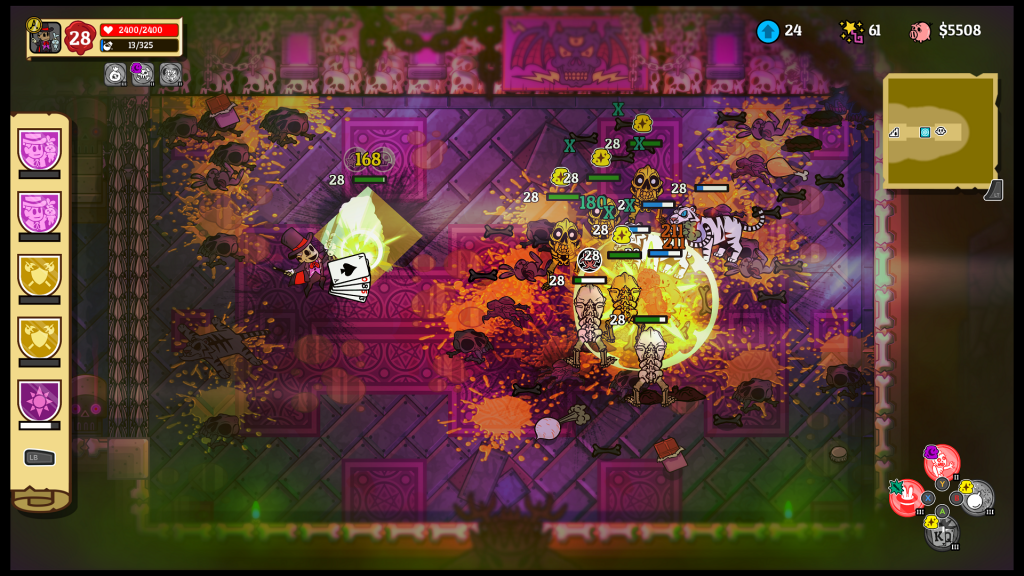 Similarly, if you fail to emphasize progression objectives, you can become under-leveled and be forced to grind for hours. I reached around level 20 by just naturally playing the game. I came to a point where every dungeon was level 25 or higher. With that I had two choices, get my butt kicked, or figure out how to move up five levels. I had to replay areas for about two hours, unlocking specific character objectives to level up. The good news is if you ever get stuck, Nobody Saves the World supports online and couch co-op with cross-play over Xbox and PC. So if you ever if you find yourself stuck at a challenging part, you can always phone a friend. The added benefit of Xbox Game Pass means they will not have to run out and buy the game.

So there is a change of pace about halfway through the game that forces you to emphasize leveling up through specific objectives. Feedback from the team says the game should take around 20 hours. My playthrough ended up being much closer to 30 hours in an attempt to experience the entire game, along with having to replay some areas. 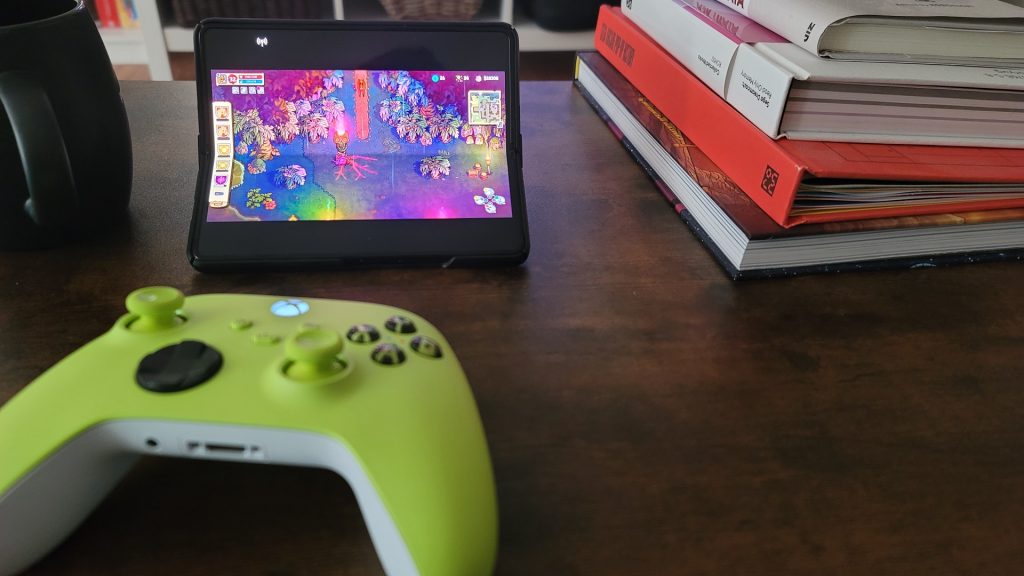 From a technical standpoint, the game is essentially perfect on the Xbox Series X. The load times never surpass five seconds. In fact, most of them are around three seconds. Nobody Saves the World runs beautifully in 4K 60 frames per second. I encountered no bugs or technical glitches while playing.

Also, I found the top-down camera view to be a perfect example of a fantastic remote play game on my smartphone. The mild level of intensity in the combat works in its favor when it comes to the small amount of input lag from multiplayer and console streaming. Given that it is in Game Pass, this will be a perfect game to play over XCloud. Our early access to the game did not include XCloud support, yet that is coming.

When it comes to sound, the team at DrinkBox has crafted a refined score that fits the traversal and combat perfectly. The sound design is about as good as it is ever going to get from a small team of 20 working from home. The effects work alongside the score and it is another reminder that this would be a dream team working on something like Earthworm Jim or other SNES era franchises.

Final Thoughts on Nobody Saves the World

Nobody Saves the World will be a timed Xbox console exclusive although, all platform owners should give it a look. The level design is versatile for different play types. Plus if you pre-ordered a Steam Deck, this could be a fantastic title to play through. The humor, couch co-op, and deep RPG mechanics make Nobody Saves the World engaging for a wide audience of players.