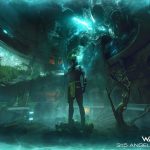 You are reading
Warframe Angels of the Zariman Reveal Incoming

Warframe ended 2021 with a bang by finally releasing the long-awaited cinematic quest “The New War”. While the quest was fantastic, the moment it was over felt off. As the only things to do afterward were to just get right back to the grind. But it seems as though the story is getting a proper expansion that will be revealed on March 11th. During one of their regularly scheduled Devstreams.

What is this expansion for Warframe?

To keep it simple and spoiler-free for all viewers, nothing concrete has been announced detail-wise. The only thing players interested in the expansion for Warframe is to speculate based on the artwork for it. The New War was a spectacular piece of content for the game and it is very exciting to see what comes next. If you’d like a review of the latest quest for Warframe and don’t mind light spoilers. You can read that here.

Don’t expect the Devstream to be strictly about the expansion, however. As they tend to go over many other changes and additions coming. Like new weapons or skins for Warframes and random weapons. But it will be fun to watch the hard-working developers over at Digital Extremes just relax and show off new content for Warframe.

Do you play Warframe? How did you feel about the New Quest questline? Are you excited about the expansion? Sound off in the comment section below.