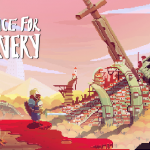 Pixel art action RPG No Place for Bravery will officially launch on September 22nd, 2022. NPFB is heavily inspired by Sekiro: Shadows Die Twice, and Devil May Cry. In contrast to both titles, NPFB has a deep narrative element that carries the gameplay through to its epic battles.

We have included this weekend’s launch trailer. No Place for Bravery will be featured among some of the more prolific indie events during this summer’s showcase. Outside of this weekend’s news, we had a chance to sit down with the developer from Glitch Factory, a small team from Brazil. We went hands-on with the game and believe us, NPFB could be the next indie darling. We love this game. The combat, the story, and the art style come together in such a fantastic way.

No Place For Bravery launches on September 22, 2022, on Nintendo Switch and Steam for PC for $19.99, with support for English, Brazilian Portuguese, French, German, Spanish, Korean, Japanese, and Simplified Chinese text.