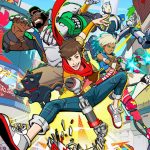 The Xbox and Bethesda Developer_Direct is live. Presenting news and extended gameplay from the latest titles directly from the developers from Bethesda, Mojang, and Turn 10 Studios. During the stream, Tango Gameworks, known for The Evil Within, announced Hi-Fi Rush.

Hi-Fi Rush is a new rhythm action game where  you play as Chai, a self-proclaimed “future rockstar.” He has an MP3 player embedded in his chest because a big corporation messed up. Our hero wasn’t supposed to get that, so the business calls him a defect, and tries to trash him. Chai runs with a group of rebels, all with their own personalities, all who want to fight big business.

The gameplay revolves around rhythm. Combat and traversal reward you for playing to the beat of the music.

“You’ll fight back against a sinister robotics enhancement conglomerate using rhythm-amplified combat where everything – from the motion in the environment to the blows of combat – is synced to the music.” –Xbox Wire

Most notably, we got a release date of tonight. The developers concluded their trailer stating the game goes live a few hours after the press conference.