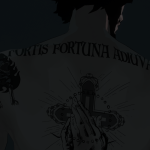 John Wick Hex can be summed up with three words: style, strategy, and simplicity. It is equal parts a turn-based strategy and puzzle game. This initially seems like the exact opposite of the kinetic nature of the films whose franchise it takes its name. However, the smartly-designed systems, clean interface, and quality animation prove this isn’t a  cheap tie in. In fact, the further into the game you get the more you realize that this game is as finely tuned as John Wick himself.

John Wick Hex was reviewed on PC with a code provided by developer Bithell Games.

A Man of Focus

John Wick in the films is a deliberate killer. He makes every movement with maximum efficiency. Yet, he is also a man of constant motion. This makes the decision to make a turn-based puzzle game fairly baffling. The world is presented in an isometric view with a grid on the floor. This grid shows the distance that John can cover in the next couple of seconds. In fact, the whole game takes place second by second. A time bar across the top which shows how long each action takes.

The contextually dependent actions are either movement or combat focused.  If an enemy is close, then John can shoot or engage in hand-to-hand combat. Because John is a better fighter than anyone he encounters, the game smartly gives John the time edge in most cases where the same action is being performed by you and the opponent. 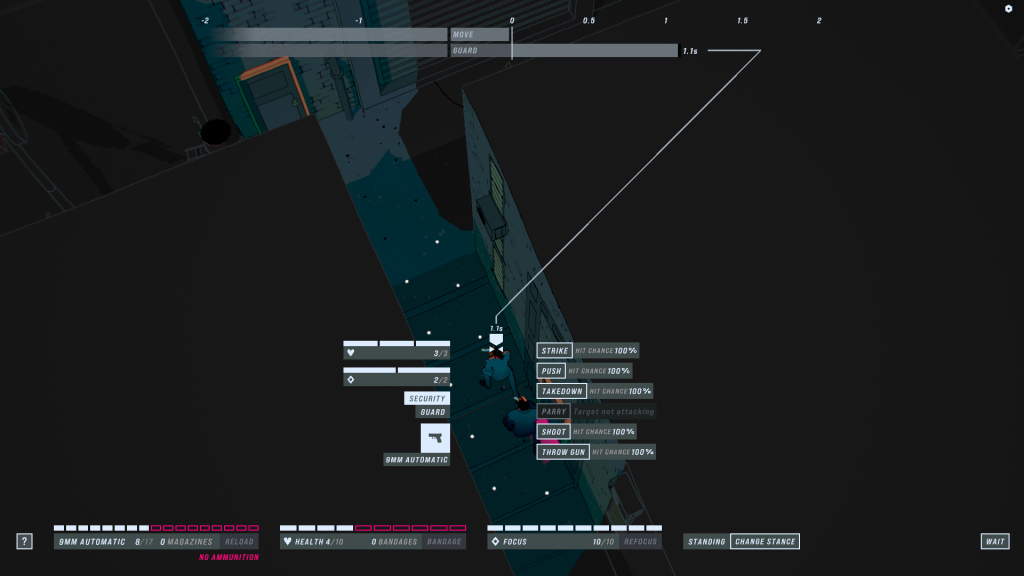 The time bar not only shows how long each move John makes will take but also every enemy in John’s field of view. Because each action takes a different amount of time, every turn is not the same length. If a new enemy comes into view, the game smartly pauses John’s actions to let you reassess the situation. A shot’s chance of hitting is also displayed and is affected by distance, whether John is prone or standing, and the terrain. It is these smart little touches that make each scenario so enjoyable. However, the same ten or so options are always available to John which means that by the time you reach the end of its 12-15 hour run time the game has definitely started to fall into a repetitious grind of move, shoot, move, takedown, strike, repeat.

A Time and A Place

John Wick Hex‘s environments are well designed, but don’t make nearly good enough use of verticality. There is also no ability to interact beyond opening a door. The potential for dynamic environmental action is there, but the game never takes that next step. By the end, the strategy is so well established that it becomes rote.

The game attempts to offer an additional layer of strategy by allowing you to buy perks prior to entering into a mission, but some of them (health boost to fourteen) for instance are so much more powerful than others (dodge an extra space) that it is almost not worth mentioning. The bonuses also don’t carry over between missions, so there is no tangible character skill progression.

Speaking of health, it is an extremely scant resource, which amps up the tension but also leads to immense frustration. I walked into a sub-mission with two points of health, which essentially equates to a single hit. It led to a three-hour long bout of frustration as a single bad dice roll on a shot would send me back to the start of the sub-mission. It may be an attempt to call back to how beat up John gets in the movies, but in-game it was more annoying than tension-inducing. 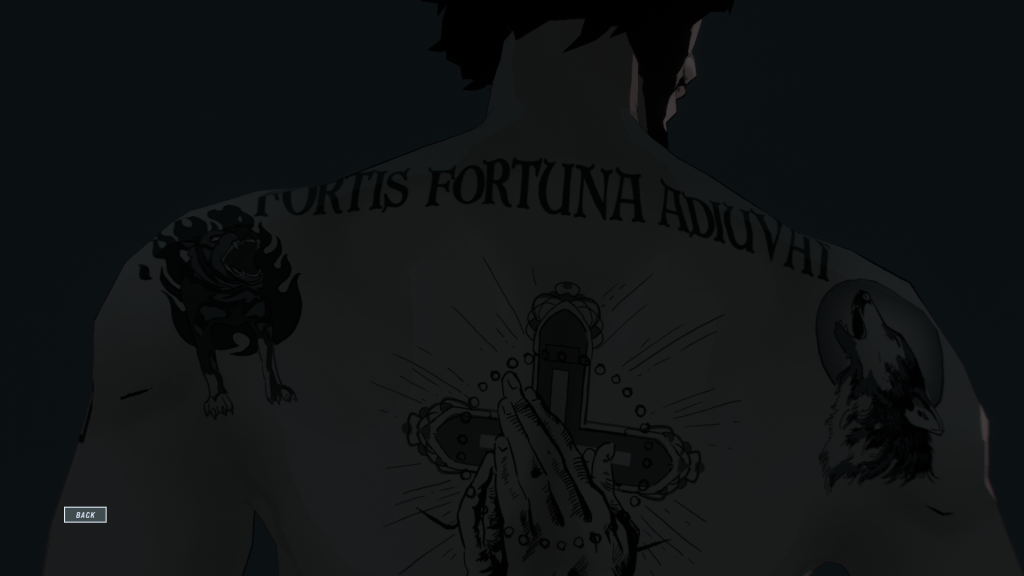 John Wick Hex takes place chronologically before any of the films, which meant that before this review, I got to watch all the John Wick movies. Charon (Lance Reddick) and Winston (Ian McShane) reprise their roles from the films as the hostages of Nolan North’s Hex, the titular villain.  Hex’s interactions with Charon and Winston provide the basis for the framing narrative. Given John’s penchant for silence, this was a good decision. It allows John to stay true to himself, while still providing commentary. This illuminates the themes of the perpetual cycle of violence and family that pervade the film series. The game is a series of flashbacks that show John hunting Hex for kidnapping Winston and Charon. It provides a compelling reason to send John globetrotting, and the game does as much as it can with the locale variety.  As John’s pathway through the past moves towards a collision with Hex in the present, the all-to-personal motivations for Hex grow stronger. 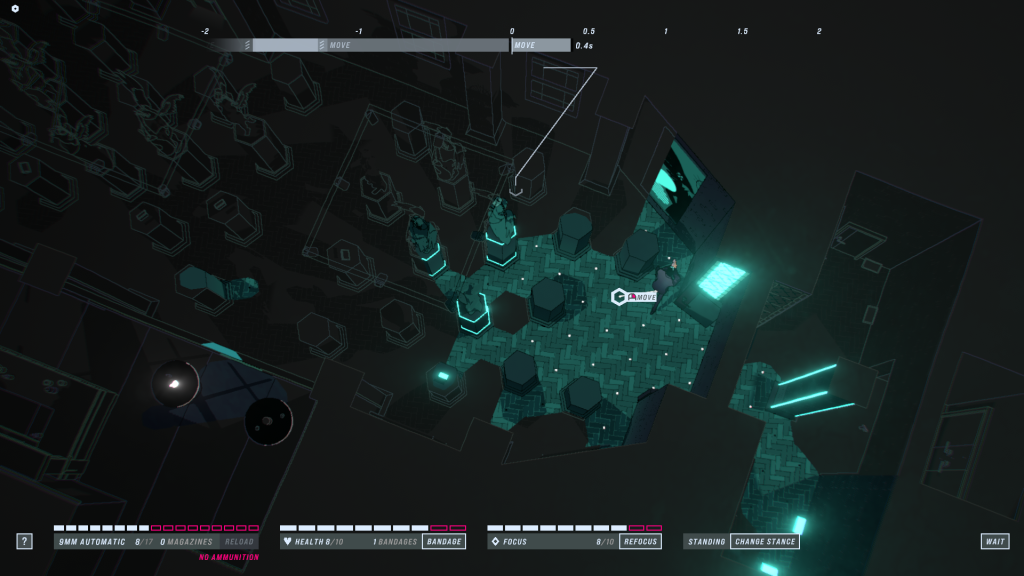 The game’s static environments also hold true for the rest of the world. The cell-shading looks great in-game. However, the static images struggle in the cutscenes to invoke any emotion in the characters. The game oozes style with its bold colors that do a great job of invoking the films’ cinematography. The voice acting is excellent and is smartly interspersed through still-frame cutscenes and during gameplay. It keeps the story rolling at a brisk pace and gives context to each of the locales that otherwise would have been missing. More importantly, it introduces each mission’s boss, which makes for some rather fun twists on the gameplay. Specifically, the maze battle was enjoyable as was the final boss fight.

John Wick Hex‘s length may be attractive to some in terms of value, but it outlasted its gameplay loop’s enjoyability. Played in small doses, the game is perfect. It is fun, compelling, and well-tuned. Played for 4-5 hour increments and it begins to lapse into monotony. The limitations of the level design and animation stiffness make John feel more limited than he should be. The story lands its ending and is certainly another compelling look into the world of John Wick, which I have found to be endlessly fascinating. Despite some minor complaints, it is a worthy addition to the series and something well worth checking out.