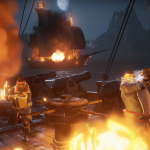 Tall Tales are Sea of Thieves story/lore missions, first introduced in late April. These missions are built towards the ultimate voyage to The Shores of Gold. This month, we got the first new Tall Tale since then in the Seabound Soul update. The Seabound Soul Tall Tale is wholly removed from the Shores of Gold plotline but still adds to the game’s lore. The Tall Tale, however, is not all that arrived! Rare brought in a slew of new Mercenary voyages, adversaries, ammo types, and cosmetics for pirates to interact within the game.

Seabound Soul Uses One of the Game’s Best Devices

The title Tall Tale focuses on fallen pirates from ages past. You find the soul of Sir Arthur Pendragon trapped in a painting. Once you free him, he requests your help in finding and freeing other trapped pirate souls. Pendragon leads you on a quest throughout the Sea to find ghostly shipwrecks, from which you find the final moments of the trapped souls. While searching for the souls, you can also track a ghost ship, called the Ashen Dragon, with journals scattered on your quest. Those journals also talk about Ashen Artifacts tied to this quest. Journals aside, you can find all of these with the Enchanted Lantern. The lantern doesn’t just illuminate your surroundings, it shows ghostly remains and footprints. Tall Tale aficionados might remember this lantern from “The Fate of the Morningstar” Tall Tale back in April. That lantern is your guide throughout the Seabound Soul and recreates ghostly images on the noted islands.

When you’ve helped Pendragon complete his quest, you can help the Bilge Rats find new chests. Duke wrote a letter explaining that he’s absent, and left Stitcher Jim in his stead. Jim gives out the Seabound Soul’s new mercenary quests, Ashen Key & Chest Voyages. Like the Ritual Skulls for the Fort of the Damned, you can run a simple voyage to find a chest on the nearest outpost or run a Legendary Chest voyage. Technically, you can just turn that chest into Jim for doubloons (and a commendation if you haven’t already), but you’ll miss out on the chest’s content. To unlock the Ashen Chests, you’ll need an Ashen Key. Fortunately, there are two ways to find a key. First, Key Masters, who carry Ashen Keys, randomly spawn on the islands, so if you find one, you can beat them for the key. Otherwise, you can pick an Ashen Key Voyage from Jim. Each original region has its own voyage, and each gives you a Key Master to hunt down. Once you have the key and the chest, you can unlock the chest, and sell its contents to Jim for doubloons.

Key Masters aren’t the only ones guarding the keys and chests. On the Legendary Voyages, Ashen Guardians guard the main treasures. The Ashen Guardians drop clues to an Ashen Chest instead of a Key. Both captains have commendations for beating more and more of them. A lone pirate might have some trouble with the Guardians, but aside from that, these voyages are doable alone.

Firebombs are the last major addition in the Seabound Soul update. They are found just like any other provision (cannon-shot, food, etc.). You can use them like a grenade, or you can load them into a cannon and launch them at your foes. If you litter an opposing ship with enough of them, their deck will go up in flames. For fairness sake, all ships have a new feature to fight the fires: water barrels. You can pull water from this barrel, and refill the water will a lever pull. Of course, NPC’s also get to use these, namely the Ashen Fleet battle. Their specialty, of course, are firebombs, and they are marked with a glowing red ship cloud in the sky.

These firebombs are not the only way to catch fire, however. Lightning strikes also set you ablaze, as do volcanic shots. If you catch on fire, you can now throw your bucket’s contents on yourself. Just make sure that you didn’t already throw up in the bucket.