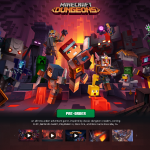 If you missed out on your chance in participating in the Minecraft Dungeons Beta, do not fret. Let me explain why. There isn’t often a time where a game franchise decides to dive into a completely new genre with the same background of the series. Out of all the games out there, the last one I would expect to go the “Diablo” route would be Minecraft, but they did it. How on earth does a pixel heavy, block by block building survival and creative game fit into a hack and slash action RPG? The two genres are very different from each other, so after playing Minecraft Dungeons Beta for a solid 20 hours, and I came to the conclusion that it just fits. After the games reveal and seeing the basic gameplay, I just hand to get my hands on the game and try it out.

I am not an original Diablo fan as I have only ever played Diablo 3. I’m sorry! I absolutely love the series, the gameplay loop, and the gear grind. There is an odd satisfaction to the gameplay, almost relaxing after you work up to a crazy character build. When I first played Diablo 3 I just fell in love with it. My fiancée and I played for many hours together and had a ton of fun. I have some wonderful gaming memories tied to Diablo 3. The hundreds of hours put into playing the game did not feel wasted.  Playing Minecraft Dungeons Beta for the first time, I got that same feeling from when I first started playing Diablo 3. There are a lot of minor aspects of the game that pay homage to Diablo, and the massive influence it has had on games.

It is safe to say I came away from this experience with a good impression. The way the game is done just fits the genre so well. Mojang put a lot of work into creating new enemies, a storyline for you to follow, and more. The combat is smooth, precise, and fun. The gameplay loop will satisfy most Diablo fans out there, and easily tide them over until Diablo 4. The character selection is awesome, loot variety is fantastic. Enchantments add another layer to the combat, where they act like perks for your character. The game is a very fleshed out and full experience from what I can perceive from the Beta. There is a lot about the game that I would like to talk about, but that will be reserved for the full review of the title. Having only a small taste of what there is to offer, Minecraft Dungeons offers a new decisive way to experience the Minecraft world. A brave step forward that can pay off in a big way. Keep your eye on this game, because if you are looking for something to fill the void before Diablo 4 you have nowhere else to look!