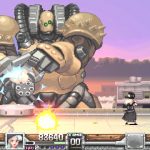 A total of four retro games are about to be added to the Nintendo Switch Online library and a couple of beloved classics are included in the mix. The most eye-opening announcement is the inclusion of Natsume’s Wild Guns, but you can also look forward to one of the very best multiplayer puzzle games ever made.

There will be a total of three SNES games added to the library in May. Though Wild Guns is the headliner. Originally released in 1994, this game has an art style that mashes together the western and steampunk genres. You play as Annie and Clint and you have to help them gun down enemies including some awesomely cheesy sci-fi bosses. You can use your d-pad to maneuver your character around the screen normally. However, if you hold down the fire button, your position becomes locked and you can now move your targeting site. The action becomes very fast-paced and you need to decide if you should remain in one place long enough to inflict more damage on the bad guys or dodge out of the way of incoming projectiles.

Wild Guns is not the only big draw this month, however. You will also get Panel de Pon with your subscription. Some of you out there are rolling your eyes at the thought of another match puzzle game, but I promise you that this one is special. It was produced by Gunpei Yokoi, the visionary who blessed us with the invention of the d-pad, the Game Boy, and Metroid. While Panel de Pon gives you a Story Mode, I encourage you to check out the multiplayer modes. They lead to hilarious and frantic fun which is just as compelling as what you see in Wild Guns. If the game seems familiar to you, that is because it was released in the West as Tetris Attack.

Rounding out the list of games is Operation Logic Bomb by Jaleco. I didn’t play this one back in the day and at first glance, it looks like the top-down levels from Contra III. There is more to the game than that, however. This one plays more like Metroid, and you will need every weapon in order to make it to the end. And finally, we have Rygar. This game does not follow the arcade version. What we get instead is an action quest game. It may not have aged as finely as The Legend of Zelda but I will give it a spin for the sake of nostalgia.

Wild Guns and all of the other games will be available to play on your Nintendo Switch on May 20th. If you want to see gameplay footage from these four titles then check out the video below.