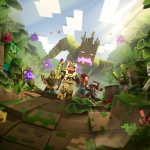 You are reading
Minecraft Dungeons First DLC Is Coming This Wednesday

Minecraft is no doubt one of the biggest IP in video games. The game has been majorly successful and has become a massive part of pop culture. Minecraft Dungeons takes the classic art style of Minecraft and smashes it together with classic dungeon crawling like Diablo. The game has quickly found an audience, with it climbing up the Nintendo Switch sales charts rapidly. Fans of the game will have something to be really excited about in a few days. As the games first DLC is set to release later this week.

On July 1st, 2020 (this Wednesday) the first Minecraft Dungeons DLC will be released. Jungle Awakens is the first of two announced DLC packs coming to the game. The other expansion Creeping Winter currently does not have a release date at this time. Jungle Awakens will give players a wide variety of new content they can enjoy. Content that will be coming with the Jungle Awakens DLC is as follows.

As part of a free update that will be dropping alongside the Jungle Awakens DLC. This update will grant players access to the Lower Temple Dungeon. While also including some quality of life improvements for the game. Oh, also this update will add Pandas. Yes, cute and cuddly pandas.

Minecraft Dungeons Jungle Awakens DLC will be included as part of the Hero Pass for the game. If you own the standard edition of the game, you can upgrade to the Hero Pass for $9.99. Which will also include Creeping Winter when it is released later this year.

Will you be checking out the Jungle Awakens DLC? Let us know in the comments and don’t forget to check back for the latest gaming news and information.

You can read our official Minecraft Dungeons review here.