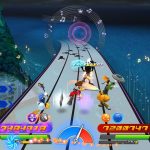 You are reading
Finally, Kingdom Hearts Is Getting A Rhythm Game

It took longer than expected, but the Kingdom Hearts series is finally getting the type of game it deserves – a rhythm game.

Kingdom Hearts Melody of Memory Gets A Release Date

After years of high praise and three orchestra concerts, Kingdom Hearts is FINALLY getting a rhythm game. Including over 140 songs, Kingdom Hearts Melody of Memory (KH MoM) embraces its action roots while hitting all of the notes of the rhythm genre. In it, you’ll play as Sora, Riku, Roxas and more alongside popular Disney characters visiting many worlds and playing dozens of tracks from the series. KH MoM is not your average rhythm game though, as it features cinematic and action-based gameplay. Some songs will have scenes from the Kingdom Hearts games playing in the background as Sora, Donald and Goofy fly to music notes. Other tracks will have Sora and characters fighting heartless and bosses. See the newest trailer below.

Harboring some of the most iconic music in the video game industry, it’s about time it was celebrated. It’s more surprising that it took so long to happen. So, I’m confused why a group of fans are upset that the next game for KH is Melody of Memory. Yes, we have had many ways to celebrate its music – concerts, soundtrack albums, musical group Project Destati, and the games themselves. But after the success of Theatrhythm Final Fantasy, what better way to put a spotlight on the work of KH series composer Yoko Shimomura than a game? I can’t stress enough how amazing the soundtrack for Kingdom Hearts is. All of the climatic battles and gut-punching emotional moments wouldn’t have the impact they do without the music. With so much range, it rivals the music of its older cousin, Final Fantasy.

“Simple and Clean,” “Dearly Beloved,” and “Roxas’ Theme” will now be more than just background music as you do house chores. Those and many other songs will be fully playable sections in a dedicated video game. I hope Square Enix plans on including both the English and Japanese versions of the lyrical tracks in the game as well.

In short, this is awesome news for fans of KH and fans of video game scores. Additionally, this, along with the January’s Re Mind DLC, looks to redeem the series’ failings on emphasizing Kairi’s role in the story. As a Kairi stan since day one, I can’t wait to see more. She always got the short end of the stick with little screen time, especially in Kingdom Hearts III. I was absolutely pissed that her death was a plot device. It still leaves a sour taste in my mouth. Hopefully, Melody of Memory gives her more to do as she searches for answers to finding Sora.

Why Melody of Memory Frustrates Me

However, there is a point of contention for me with KH MoM. It has to do with the most frustrating part of Kingdom Hearts lately – its story structure. Melody of Memory is, in fact, canon to the narrative and takes place after KH3. Now, I’ve been rocking with the franchise for 18 years. I’ve poured over every detail in the game. I’ve attended the concerts. I stayed up late at night beating the games on their hardest difficulties. My first tattoo is the Oblivion and Oathkeeper keyblades crossing over one another. And how Kingdom Hearts is distributing its story is incredibly aggravating. 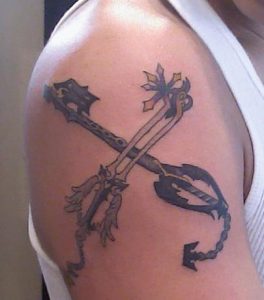 My first tattoo at 18-years-old with Oathkeeper and Oblivion crossing each other.

Personally, I fully blame the mobile game Kingdom Hearts Union χ. Set many years before the events of Birth by Sleep, Union χ has been laying the foundation for the series’ new saga over the past five years. If you would have told me that a mobile game would influence the outcome of Kingdom Hearts III, I would have looked at you like you were insane. But, here we are, and that’s exactly what happened. I sincerely hoped we would be seeing a cleaner story direction after KH3. Or, a non-canon game at least.

Unfortunately, Melody of Memory and the continuation of Union χ are carrying the torch for the future of the series. While I’ll always be along for the ride, I’m worn out. Talking to numerous hardcore fans, we agree that the story became so muddled and piecemeal-ed after Union χ. The series is repeating its mistakes that started with Chain of Memories on Game Boy Advance. The situation got worse with Union χ, and KH3 directly influenced by it. Now, the story for the inevitable Kingdom Hearts IV will be relying on the events of a free-to-play mobile game and a rhythm game. See how ridiculous that sounds? While I am really happy KH is finally getting the rhythm game it deserved, I’m also snapping at the decision to make it canon.

My love for this series runs incredibly deep. While the story is cheesy and the series has a stigma of being just for kids, it has a lasting power. The themes of brotherhood, friendship, and perseverance shine in Kingdom Hearts. In a real world full of darkness and hate, the series reminds us that good does exist; that a spark of hope is always there when the weight of the world is too much to bear; and regardless of who you are or where you’re from, kindness is a language spoken by all. These themes are accentuated in its characters, its story, and most importantly, the music.

The upcoming rhythm-action game will debut on Switch, PS4 and Xbox One family of devices on Nov. 13, 2020. Stay tuned to LordsofGaming.net for more information on Kingdom Hearts Melody of Memory as we head closer to launch.