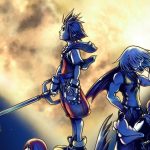 You are reading
Every Kingdom Hearts Opening Movie Ranked

It’s time to rank the best part of starting any new Kingdom Hearts game – the opening intros. Since 2002, pop artist Utada Hikaru, composer Yoko Shimomura, and Square Enix have delivered some of the coolest music-based cinematics in video games. Funny enough, the amount of openings in the entire series sits at thirteen, which is Kingdom Hearts’ signature story-relevant number. Nomura-san, you sly fox…

Note: Spoilers for Kingdom Hearts III and the entire series. You have been warned!

13. Kingdom Hearts Re: Chain of Memories

Re: Chain of Memories‘ opening movie is arguably the most plain of the thirteen. In it, the cinematic HD flair is replaced with a montage of the first game’s events using the original in-game cutscenes. Besides that, it wins some favor for nostalgia and as a brief recap for returning players. However, it’s definitely not as good as the rest.

This one purely gets a spot because of the new version of everyone’s favorite song to cry to, ‘Dearly Beloved.’ This take on the series’ staple melody has a cute and more fast-paced tone compared to its more dramatic cousins. While the opening itself isn’t great, the featured scenes from the mobile game have a definitive art style that fits the series so well.

Fairly similar to Re: Chain of Memories‘ opening movie, Re:coded‘s short music video has a few nuances worth mentioning. For one, the combination of moments between both KH1 and KH2 just flow better with the ‘Simple and Clean Remix’ song. The very beginning scene also highlights the relationship between Sora and Namine, making their reunion in KH3 more fulfilling.

Additionally, the song’s literal final breath syncs perfectly with the Kairi to Namine visual transition followed by the iconic yellow and gold of the title fading in. It’s those fine little touches that make this opening movie better than okay.

Introducing us to a new trio, Birth by Sleep‘s opening movie is fantastic. Keeping the intrigue, this cinematic has heart-pounding CG animated scenes with great lighting, smooth transitions, and bits of Kingdom Hearts II Final Mix‘s epic secret ending thrown in. The game itself is an emotional roller coaster, which is well-reflected in the intro.

While the ‘Simple and Clean Remix’ pairs really well with what we see, I still stand by my opinion that Birth by Sleep deserved its own song.

While this opening may not seem super special at first, it wins major points for its beginning alone. With ‘Sanctuary’ in the background, a melancholic conversation between Axel and Roxas is shown, questioning whether they have hearts or not. Now that we have seen the Xehanort saga to its end, this scene is heart-breaking since fans know those coveted answers. The opening movie ends with Roxas and Axel before fading to black to reveal the eye-candy deep red, almost sunset-ish color of the game’s logo.

Fans can also pinpoint a fun foreshadowing in Xigbar’s intro here. A line in Xigbar’s description reads “Traverses between realms”, which is now a big, fat clue to his true name and identity.

‘Hikari (Instrumental)’ is a masterful piece of music. What other song can musically characterize the magic of Disney and themes of Kingdom Hearts? Yoko Shimomura really hit the nail on the head when it comes to the music in the Kingdom Hearts series.

The movie itself is simple with cutscenes from the game included in a compilation. By the end, you can’t help but have an adventure-driven attitude and feeling happy to be a part of the series.

KH 0.2‘s cinematic intro gives us a new version of Utada’s ‘Simple and Clean‘ that may be the best remix of the song yet. It’s the movie we never expected to get, but I’m so happy that we did. The gorgeously animated opening also gives the spotlight to fan-favorite Aqua, putting her through heart-wrenching moments like clashing against Terranort and Ventus-Vanitas.

In an absolutely bittersweet visual, we see Aqua reach for Sora’s hand to be brought back into the light. It’s a moment all Kingdom Hearts fans wanted, and A Fragmentary Passage brought us closer to that long-awaited rescue.

“I’ve been having these weird thoughts lately. Like, is any of this for real, or not?”

The one that started it all. Kingdom Hearts‘ opening movie took players by complete surprise and left them equally confused and intrigued by what it all meant. ‘Simple and Clean Remix’ also made its debut and was, arguably, what everyone loved the most about the opening.

We’ve all been jammin’ to the same J-Pop song for seventeen years now (and more if you’re reading this list past 2019) and it never gets old. The visuals themselves are iconic trendsetters for the saga, such as Riku reaching out to Sora as a giant wave is about to crash on him and Sora’s awakening.

‘Face My Fears’ is such a Kingdom Hearts-type of song. At first, you may not fully understand how it relates to Sora’s adventure given his optimistic nature, but then you keep playing. At some point, it clicks that Sora is afraid. He is doubtful. But it’s up to him to face those fears and overcome them.

Thanks to the leap in technology, Kingdom Hearts III‘s opening is jaw-droppingly beautiful with crisp visuals and details fans have never seen before. While I was left with a “I’m about to play the most epic game ever”, the hype wasn’t there as much as the openings that are ranked higher on this list.

‘Don’t Think Twice’ (Instrumental) is a powerfully emotional version to the Kingdom Hearts III‘s lyrical song of the same name. The visuals shown are part nostalgic, part overwhelming as we’re taken through events of the entire series. The fun parallel here is the board game symbolizing those events. For every move made by the two young characters, a key moment in the series takes places.

The idea is clever, but the true star in this opening is the instrumental rendition of ‘Don’t Think Twice.’

The instrumental version of ‘Passion’ is the driving force of Kingdom Hearts II‘s entire title screen cinematic. As soon as the song starts, your attention is immediately fixed on what you’re about to see.

Chills will go down your spine as you experience a taste of the adventure in Kingdom Hearts II.

Honestly, Dream Drop Distance‘s opening sequence is as much of a perfect setup to the end of the Xehanort saga as Kingdom Hearts III‘s opening. Using the ‘Hikari (Instrumental)’ song, the movie hits on every note of nostalgia for longtime fans.

On the animation side, we get to see some truly epic scenes from past games in high-definition CG. Shots of the 358/2 Days trio, Sora and Riku’s fight with Xemnas, and other pivotal moments encapsulate how far these characters have come. Out of all of the openings, Dream Drop Distance did the absolute best work of vaguely summarizing events from past games into an intense mini-adventure.

To cap it off, fans get a glimpse of the long-awaited final battle between our heroes and the series’ main antagonist. If it was possible, this opening would be number 1.25 on this list for how great it is. This is Kingdom Hearts we’re talking about here, so that idea wouldn’t totally be out of left field…

The opening monologues from Sora in each numbered KH game are perfect foreshadows. From my perspective, the ominous voice line signifies the ties between the game’s known characters and Sora’s willingness to see their reunion.

We are immediately swept into the song’s emotional pull all until the very end. Kingdom Hearts II‘s opening with ‘Sanctuary’ sets a somber, yet exciting tone for the beginning of the game. Compared to the first game, this opening feels like we’re playing a different kind of Kingdom Hearts game; one that’s evolving the series into something we never expected.

The music-visual pairing is set up perfectly in this opening. Just listening to the song can have one recall the exact visual companion in the cinematic. While my opinion varies on which is my favorite, there’s no denying that Kingdom Hearts II has the best opening movie in the series.